Hello everyone! Today I am pleased to welcome author Kimber Vale to the blog.  Kimber is here to talk to us about her new release, Double Takes.  She has also brought an exclusive excerpt, as well as a great giveaway to share. So please join me in giving Kimber a big welcome!

Where do you stand on bisexual characters?

I saw a kerfuffle not too long ago. I want to say it was at least partially on Goodreads, because, let’s face it, GRs is Kerfuffleville, but I also saw some fallout on Twitter. Just depends on where you’re cyber hanging, I guess. Anyway, it was the whole, “No I won’t touch a book with a vagina written in it and don’t you dare surprise me with one!” debacle.  I’m paraphrasing. It wasn’t spelled out exactly that way. Shit, I’m not even sure it qualified as a debacle.  Anyway, while I was writing Double Takes, that diaper load hit the AC unit. I remember tweeting to someone, “I just wrote a vag into my WIP!”

Don’t quote me on that, even though I used quotes.

Well, to clarify for the militantly anti-vag readers out there, the beaver in question was a photo sent to someone on Snapchat, so I believe I wouldn’t be bombed outright for such a write-on. Perhaps unfortunately maimed in the crossfire, but certainly not tortured and eventually tossed in a pit of used feminine products.

But what of bisexual characters, all this made me wonder? Do readers shy away from those because a bisexual, by definition, desires both sexes? Maybe there is an increased chance of a surprise set of lower lips in a bi book, huh?

My new release, Double Takes, only includes snoo-snoo of the very gay, very guy variety, even though my MC, Gio Savale, is bisexual. But that whole wild debate left me wondering about the readership of MM books. Are most people firmly against any sort of, well, female anatomy showing up between the pages? I mean, so many MM readers are women, so it would seem that the occasional putang wouldn’t be the end of the world. Is it a deal-breaker? Something you can read past and tolerate? Just a dollop of whipped cream on your erotic romance sundae?
Let me know your thoughts. I’m seriously bi-curious!

Ah, the life of a rock star. Everyone thinks it’s nothing but sex, drugs, and rock and roll.

Not for Giovanni Savale.

For the lead singer of Three Deaf Mice, a band that reached its pinnacle in the late nineties, it’s nothing but an ugly divorce with a custody battle, money trouble, and now the nightmare exposure of starring in a reality television show. When his producer decides to cash in on an infamous interview Gio did years ago, and give the self-confessed bisexual rocker an onscreen boyfriend, things really hit the fan. Gio is certain his sexual experimentation back in his drug-abusing days meant nothing — after all he’s been married for nine years, clean and sober for nearly as long, and he has a son. And Gio is not remotely attracted to Kyrie, the funny, flamboyant actor they choose for his love interest. Of course, Lance Garrett, the mysterious and sexy owner of the local antique shop, Double Takes, is a whole different story. The guy has Gio planning out a future he never imagined. With the threat of losing all custody of his ten-year-old son, ghosts from the past returning for revenge, and the cameras rolling, can Gio keep his head above water and his heart from getting broken?

The steady beat of London Calling pulsed through the DJ’s speakers and a group of guys with multicolor mohawks, guyliner, and boots that looked too heavy to lift began to writhe on the dance floor. Kyrie gave an animated description of the “to die for” costumes used in the production he was auditioning for, and how he’d love to abscond with one to wear to the wedding. He actually used the word abscond, to which Gio raised an eyebrow, but he was only giving Kyrie half his attention. Gio surveyed the live entertainment all around them as he frantically tried to figure out how this was going to work.

He wanted Lance with him in New York.

The Clash segued into The Ramones. It had to happen sooner or later.

he men in drag shook their stuff onto the dance floor to the upbeat strains of I Wanna Be Your Boyfriend. The dancing went from innocent to scandalous in a matter of moments as the sweet “girls” in the club merged with the bad boys of garage rock. Gio turned away. They’d definitely need to take that tape to the chopping block to make it suitable for prime time.

Maybe it was enough that he’d asked Kyrie to go. They could use it for the show. Who knows if Chance and Alex will allow the cameras at their ceremony, anyway? He would need to find out.

Gio plastered a cool hand on his forehead for the return of a headache that was never far off.

“Wanna get out of here?” Kyrie touched Gio’s cheek, and Gio turned to see if Dangerfield was paying attention from the other table. He never knew what to think, what was for show and what was real? Gio needed to explain to Kyrie, make sure they were cool. Now was as good a time as any. Stand by for more tape you’ll need to slice and dice, Kevin. “Hey, just so we’re clear.” Gio pointed to Kyrie and then to himself with all five fingers. “This is not gonna happen.”

Kyrie smiled and a sage look that was usually hidden beneath his boyish innocence broke through. “Don’t worry. I’m just giving ’em what they asked for. Judging by the way your face went purple when the alterna-twinks started doin’ the drag-shag, I’m guessin’ this is not your place.”

“Does your thing have a pussy or a cock? Or are you really an equal opportunity boinker?”

“Boinker? Seriously?” Gio laughed. “Come on. Let’s get out of here.” He stood and the camera guys moved with him. “I want a gyro.”

They walked past the dancers. Gio tried to give them a wide berth as Kyrie boogied his way through and gave one punk the fake spank. 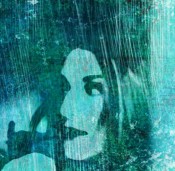 Kimber Vale writes romance of all stripes, from hot hetero stories to mouthwatering men falling in love (under the name K. Vale). Keep up with Kimber’s news on her blog: http://www.kimbervale.me and friend/follow her on Facebook and Twitter @KimberVale. Come for the sex. Stay for the story. http://www.authorkimbervale.com

Kimber has a $25 Amazon or Barnes & Noble gift card (winner’s choice) up for grabs!