Today I am so pleased to welcome Shae Connor to Joyfully Jay. Shae has come to talk to us about her latest release, Unfortunate Son. She has also brought along some fabulous photos to share of her cover model photo shoot! Plus a really fabulous giveaway! Please join me in giving her a big welcome!

Not long after I started working on Unfortunate Son—and LONG before it was finished—we had a photo shoot for the cover art. Travis Irons, the model and friend who’d been the original inspiration for the story, had happily agreed to model for the cover, and T, a local photographer friend of mine (www.feedyoureyes.net), signed on to take the pictures. I’d never been to a true photo shoot before, so I was pretty stoked to get to watch the process.

We met at T’s studio

, in a warehouse space in Midtown Atlanta, and after signing paperwork, we talked about what we were going for. Travis was wearing a new “Legalize Gay” t-shirt and wanted to get a few personal shots wearing it, so we started off with those to allow photographer and model to get adjusted to each other before moving on to trying to capture images for the book cover.

The first round was by turns fun, funny, and yeah, hot, considering Travis ended up stripping down in a quest for the shot you see here: him jumping in the air with the t-shirt flying in front of him. I have dozens of NSFW “failed” shots from that sequence.

Once that was done, Travis changed into the camouflage pants I’d asked him to bring, and we started on the cover shots. I knew only that I wanted a military feel and a melancholy mood for the final shot, and I let the professionals go from there. T had the flag available on set, and when he took the shot that ended up on the cover, I had a feeling that would be the one. Still, there were several other close contenders. I particularly like the one of Travis sitting, half in shadow.
We finished off our session by taking a few shots of me and Travis together, just generally being goofy and having fun. 🙂

As it turned out, taking the actual pictures was the easy part—though I’m not sure Travis or T would agree! Narrowing the list down to just five to be “cleaned up” and ready for use, and then picking only one for the cover? Yikes! Writing the story itself was almost easier than that! 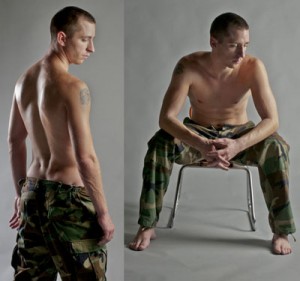 Finally, I had the image I wanted for the cover. Thankfully, because the book is going into print, I was able to pick a second shot—of the tattoo on Travis’s shoulder—that will appear on the back cover. And, of course, the other images are available for me to use for other book-related promotions.

I learned a few things from putting together the cover art for this book. One is to write the book first! The most difficult part of the process was the waiting game. I’m glad we did the shoot when we did, especially since Travis moved away from Atlanta not long after that, so it would’ve been much harder to schedule something later. But having the images for two years before I could show them in public nearly killed me! Even if I picked out a cover model to use for a future book, I’d wait until the book is written before I try to get a specific image (through a shoot or otherwise).

Another lesson: more is better. Yes, it was tough to pick out just a handful of images to use from the many that the photographer captured, but having so many options made it easier to be sure the ones I picked conveyed everything I wanted them to about the book. Photographers take so many shots not just to be sure they’re clear and focused but also so they’ll capture ones that tell the right story. The images we took with Travis smiling were great, but totally wrong for the cover.

Of course, one of the most critical parts of any cover is the cover artist. Dreamspinner Press always does an amazing job with cover art, and this time around my artist was the amazing Paul Richmond, who did my very first cover art (for Model Student). He grasped what I was looking for quickly and nailed the design on the very first try. (And it’s a style that will work well for the following books in the series too!)

Being on set for a cover photo shoot was a great experience. I’d love to be able to do that again someday!

Then Evan’s family reappears his life, and Evan soon learns Riley has his own family-inflicted wounds—ones that make it hard for him to be there for Evan. A disastrous confrontation between Evan and his parents leaves Evan’s mother injured and Evan overcome by anger and fear. Losing his tenuous hold on his emotional control, Evan makes one bad decision after another, but maybe his final fall will be the wake-up call Evan needs to set things right—with his parents, and with Riley.?

You can find the book on Dreamspinner Press and Goodreads.

Shae Connor lives in Atlanta, where she’s a lackadaisical government worker for a living and writes sweet-hot romance under the cover of night. She’s been making things up for as long as she can remember, but it took her a long time to figure out that maybe she should try writing them down. She’s conned several companies into publishing her work and adds a new notch on her bedpost each time another story is unleashed onto an unsuspecting universe.

A member of the Romance Writers of America and the Rainbow Writers chapter, Shae was first published in 2010 and has a lineup of short stories, novellas, and novels available from Dreamspinner Press, Wilde City Press, MLR Press, and Amber Allure.

Shae is part Jersey, part Irish, and all Southern, which explains why she never shuts up. When she’s not chained to her laptop, she enjoys cooking, traveling, watching baseball, and reading voraciously, and she’s an annual volunteer for the Dragon Con on-site publication, the Daily Dragon. You can find her hanging out on Twitter most any time @shaeconnor, but for the more direct route, you can email her at shaeconnorwrites@gmail.com or visit her website at shaeconnorwrites.com.

Shae has brought along a $25 Dreamspinner Press Gift Card, a Cover Flat signed by herself on Travis, and a copy of an ebook from her Dreamspinner back list to give away. Just follow the Rafflecopter link below to enter.