Guest Post and Giveaway: The Windup by Kate McMurray

Today I am so pleased to welcome Kate McMurray to Joyfully Jay. Kate has come to talk to us about her latest release, The Windup, the first book in her new The Rainbow League series. She has also brought along a copy to give away. Please join me in giving Kate a big welcome! 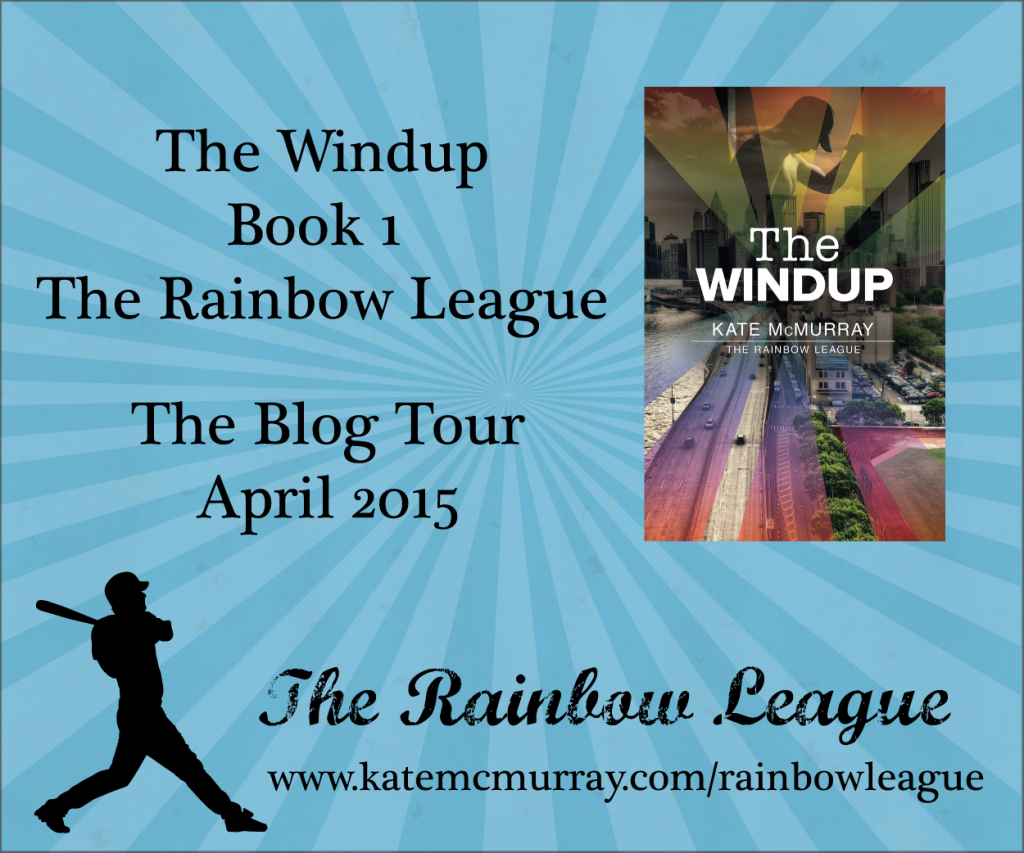 This post is probably going to be a little wonky and maybe too much inside baseball (if you’ll pardon the pun) but I think it’s kind of a fun story about how some books came to be.

I love series books. Reading them is kind of like getting really invested in a TV show, only more intense because in books, you often get more about the characters’ inner lives. I like both series that follow one romantic pair (Victor and Jacob in Jordan Castillo Price’s Psycop series, which I just caught up on and love the hell out of) or ones that follow different romantic pairs in each book but are all set in the same universe (J.R. Ward’s Black Dagger Brotherhood, for example, or Suzanne Brockmann’s Troubleshooters series, to name two of my absolute favorites). These examples are all pretty action-y, but you can do it with contemporary series (Jill Shalvis, say, or Kristan Higgins) or historical (Sarah MacLean’s Rules of Scoundrels series) or paranormal historical (K.J. Charles’s Magpie books, Jordan L. Hawk’s Whybourne and Griffin series) or, really, any genre.

But series books. I love them. So here’s how my series came about.

At the RWA convention in Atlanta in 2013, I attended a workshop by Sarah MacLean and Eloisa James on how to plan and pitch a series. I walked out of the room inspired and determined to write a series of my own. I ran into Damon Suede at the hotel bar and related what I’d learned and what I wanted to do, but I said, “I have no idea what the premise of the series would be.”

Obviously, right? “Okay,” I said. I thought about it for a moment. Then I pointed out, “What are the odds that one major league team would have enough gay players to populate a whole series?”

“Who said they had to be professional?” he said.

Light bulb. We spent the next ten minutes spitballing punny team names for a fake baseball league (most of them were raunchy and inappropriate) but I went home from the conference convinced this was a valid idea. I filed it away for later.

A month or two later, an article ran in the LA Times about how gay sports leagues were the new hot hookup spot.

And so the Rainbow League was born.

I decided that if I was going to write a whole series, I was going to plan it out from the beginning. I knew the following things right off the bat: there would be three books to start with the potential for more; book 3 would resolve an arc that begins in book 1; the center of the series would be this fictional amateur LGBT baseball league.

The first thing I did was create eight teams. I’ll be honest, I am not even a little bit athletic, so some of what I created was based on other frames of reference. I borrowed from other kinds of leagues. I had coworkers who used to play for this hipster kickball league that was really more an excuse to get together and drink after the games. An ex-boyfriend of mine played softball for a league (I forget what the gimmick was; people who worked in IT, maybe). They played in the same park every week and had cutesy colored tee-shirts like a low-rent Little League for grown-ups. So the Rainbow League is basically a combo of the two. With punny team names.

The Rainbow League is a bit of a utopia, perhaps, a place where people can be themselves and just play baseball, and it’s set up that way deliberately. Everyone who plays in the league has a life outside of the game, and that’s where their problems begin. But I wanted for the field itself to be a safe place. Maybe that’s my optimistic view of the world talking; Out in the Field ends the way it does for a reason, for example.

Speaking of Out in the Field, fans might be happy to learn I dropped a few Easter eggs into the Rainbow League series. So look out for those.

Book 1 drops this week. It’s about Ian, who is moving back to New York after a long time away. He joins the Rainbow League as a way to meet people. He meets Ty, a transplant to New York from Texas; he has a reputation for sleeping around the league, though tales of his exploits are largely exaggerated. Ian hates New York and wants to move as soon as his job is over, but when he and Ty start dating and subsequently start falling for each other, Ty makes it his mission to convince Ian to stay. Also, they play a lot of baseball.

So that’s how this series came to be. I hope you enjoy it!

Ian ran screaming from New York City upon graduating from high school. A job offer too good to turn down has brought him back, but he plans to leave as soon as the job is up. In the meantime he lets an old friend talk him into joining the Rainbow League, New York’s LGBT amateur baseball league. Baseball turns out to be a great outlet for his anxiety, and not only because sexy teammate Ty has caught his eye.

Ty is like a duck on a pond—calm and laid-back on the surface, a churning mess underneath. In Ian, he’s found someone with whom he feels comfortable enough to share some of what’s going on beneath the surface. The only catch is that Ian is dead set on leaving the city as soon as he can. Ty works up a plan to convince Ian that New York is, in fact, the greatest city in the world. But when Ian receives an offer for a job overseas, Ty needs a new plan: convince Ian that home is where Ty is.

Kate McMurray is an award-winning author of gay romance and an unabashed romance fan. When she’s not writing, she works as a nonfiction editor, dabbles in various crafts, and is maybe a tiny bit obsessed with base­ball. She has served as President of Rainbow Romance Writers, the LGBT romance chapter of Romance Writers of America. She lives in Brooklyn, NY.

Kate has brought a copy of The Windup to give away to one lucky reader. Just leave a comment at the end of the post to enter. The contest ends on Sunday, April 27th at 11:59 pm EST.