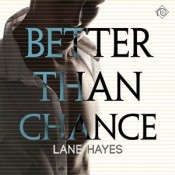 Jay thinks the guy that is the lead of his project at work is hot, most everyone does. But most everyone also thinks he is straight as well. That doesn’t stop Jay from looking and thinking and…well he just needs to get back to work. Jay’s thoughts come to an abrupt halt when Peter starts singling him out for minute changes in grammar and Jay tries to keep up the distance between them. But when Jay gets into some trouble one night, Peter comes to his rescue.

Peter is successful and confident in most areas of his life. He has avoided commitment and claims he isn’t looking for it now. When the sexual tension between the men becomes too much to ignore, they agree to one night together to get it out of their systems and then it’s back to being co-workers. But one night isn’t nearly enough and the men develop a friends-with-benefits relationship. Jay wants more, so much more, but he’s afraid of losing Peter all together. When Jay’s feelings become just too much, it’s up to Peter to take a chance or lose Jay forever.

The coolest thing that can happen is when a secondary character that made no impression on you in a first book gets their own book and makes all of the impressions. That is exactly what happened here with Jay. We met Jay in the first book in the series, Better Than Good, and he was just in the background. Better Than Chance takes place five years prior to the first book and they can be read in any order. The book opens present day, but then is told in one solid flashback.

One of the reasons that I liked Jay so much had a great deal to do with the spectacular narration provided by Tyler Stevens. Jay is Southern and all kinds of fabulous, yet he is also remarkably grounded, witty, and intelligent. He really wants to find his guy but knows that, “…the most gorgeous ones were either straight, taken, or assholes.”

The book is told entirely through Jay and he’s not the most observant guy of what’s going on around him. It’s not even that he’s an unreliable narrator, because you just know he’s not interpreting things as they really are. He falls for Peter fast and hard and knows when they are together there is, “something special in the air with no way to quantify it.” But he can’t let himself go there because they are only supposed to be friends. Then one night a week turns into a few nights a week, which turns into weekends spent together. The guys develop a solid friendship and have the best time together, but Peter keeps holding back.

Even though we know from the first book and it’s stated at the beginning of this one that the men are together, it was still captivating to hear their story and how they figured it all out and there is plenty of tension for a foregone conclusion. I could have used some direct insight into Peter as the reason for his hesitation in having a relationship didn’t come across as strongly when told second hand. The epilogue brings us back to the beginning and present day, but I could have used a little extra between the last chapter and the scene in the epilogue. But, those were minor issues for an otherwise entertaining and engaging book with two interesting characters.

Tyler Stevens was simply amazing in his narration here and I thoroughly enjoyed his performance. He made Jay completely come alive and I do believe I enjoyed his character more having listened to him versus only reading. Jay’s Southern accent is perfect for him, completely captured his personality, and was never overdone. Peter’s voice was the perfect balance with his take charge style and the entire performance had great flow and great timing. Aaron, from the first book, appears and has the same voice as before, which then helped maintain the consistency. The female characters here were the only weak spot as none of them sounded particularly female and some sounded like the other male characters. But overall it was truly great narration with an entertaining story about finding the right guy and is both a recommended story and a highly recommended audio performance.