Audiobook Review: Running with the Wind by Shira Anthony 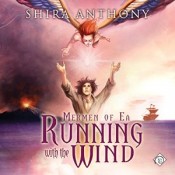 Note: This story is the third in the Mermen of Ea trilogy and, as such, has some spoilers for the previous books.

With war between the mainland and island Ea looming, Taren is determined to find the site of the lost Ea colony in hopes that they can find a new home for their people. The group is welcomed on their journey by the King of Astenya who seems to want peace and a good relationship with the Ea. But Odhrán is still wary, especially as the king expresses interest in Bastian and Odhrán feels very protective over the young, winged boy.

Once Taren learns more about the lost Ea colony, he knows it is time to finally address the war between the Ea factions. Things have gotten worse for the island Ea and Taren believes the only choice is for them all to unite together. But Seria is still full of hate for Taren and Ian and has no interest in letting the islanders leave. Now Taren must call upon the power of the goddess and the magic rune stone to help him lead his people to safety and a new life.

Shira Anthony has created a really interesting world in this Mermen of Ea series. I have been following the story for three books and it is so creative and well developed and for me that is the highlight of the series. The characters are well developed, the world is detailed without being overly complex, and the conflicts are engaging. The trilogy follows the overarching plot arc of the conflict between the Ea groups and I think this story brings it all to a nice conclusion. In particular, I have enjoyed Taren’s journey from a poor, mistreated servant to a strong and powerful leader over the course of the three books.

In addition to the world building, I think this series also shines in the character development. In addition to Taren and his lover Ian, we also get to know many members of the various ships’ crews. I found Bastian’s story particularly compelling and I love how it is woven into the larger saga. Those looking for a romance very focused on Ian and Taren won’t really find it here, and at times I felt like I was missing the connection between them from the first book where their relationship is at the forefront. But I think Anthony has given us a really interesting cast here and done a nice job weaving them all together.

It has been almost two years since I read the second book in the series and I think that I suffered a bit here as a result. Although I still remembered the basics and reread my reviews, I did find myself a little lost as this story jumps in right after the second book left off and things are pretty complex in terms of what is going on. It didn’t take me long to get back into the swing of things, but I would suggest these books be read closer together and definitely in order to enhance your reading experience. This story focuses more on the political side of things, especially in the beginning as the guys journey to the lost colony. The story seemed to get a bit of a slow start for me as a result, mostly because not much happens here and it takes up a good bit of the first part of the book. I think the action picks up more as the battle between the Ea factions grows, but overall I found this installment not quite as fast-paced as the others.

Michael Stellman does the narration on this story and I continue to enjoy him as a narrator. He has a nice voice with an even tone and good pacing. Stellman doesn’t really differentiate voices between characters, something I missed a little here, as this is a big cast and everyone sounds pretty much alike. I also found Stellman doesn’t really change tone or shift his presentation in the more action-packed and thrilling moments, something that I think diminished some of the more high excitement scenes. So while it was a very pleasant listening experience and I certainly like him as a narrator, I did feel like I wanted more dynamic in his narration. I also mention that personally, I probably would have done better reading the book version here, again because I felt a little bit behind what was going on when the book started. It is harder when listening to go back and re-read or to stop and focus on particular elements like you can when reading. That is nothing negative about this particular performance, just an observation about what format might have been better for me in this case.

Overall I think this is a nice end to the Mermen of Ea series. I have enjoyed getting to know this world and following along with the trilogy. I think Anthony does a nice job wrapping things up in the final installment. If you are a fan of fantasy and mermen in particular, this is definitely a nice trilogy to check out.