Today I am so pleased to welcome Kelly Wyre to Joyfully Jay. Kelly has come to talk to us about her latest release, Earthquakes – A New Amsterdam Story. She has also brought along a tour wide giveaway. Please join me in giving Kelly a big welcome!

Hi there! I’m so excited to be here today on Joyfully Jay to talk about my new novel, Earthquakes: A New Amsterdam Story. It’s the next installment in the New Amsterdam series, and it involves guns and ballet, two of my favorite things.

To celebrate the release, I’m doing a blog tour, and no tour is complete without prizes, amirite? I’m giving away a $25 Amazon gift card, a lovely necklace with a quote from Sinatra’s, Strangers in the Night – “Love was just a glance away, a warm embracing dance away” – and a free ebook copy of the book!

How to enter? That’s easy… See the Rafflecopter info below in the giveaway section for all the ways to win!

Meanwhile, I think I’d like to chat a bit about the characters in this world. It’s quite the web they weave. See? 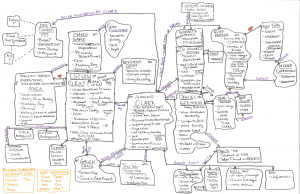 CHECK OUT THE MASSIVE VERSION OF THE CHARACTER WEB RIGHT ‘CHERE.

I know that thing makes MY eyes cross, so let’s break it down.

Ellis was first seen in Hearts Under Fire. He had a cameo appearance at Club Break and spoke to Clark, his most-of-the-time Dom. Ellis went on to star in the novella, Shot in the Dark, wherein we got to see him play with Clark back in the days before Daniel Germain walked into Clark’s life.

And now? Ellis has his very own novel. *sniffles* Baby’s all grown up…

Ellis is about 5’9” or so, with bright red hair, Christmas-green eyes, and freckles. Super pale skin, a smattering of military tattoos, and a pair of seriously broad shoulders. He’s got farm-bred muscle and physique, as he grew up on a farm in Oklahoma. He left as soon as he could. Served in the military. Got out. Landed in New Amsterdam. And met Clark.

…and has never been the same since.

Most would say he’s in love with Clark on some level. Ellis would tell you Clark saved his life and changed it, and he’s a combination grateful and in awe of the man. He wants to be Clark when he grows up. And I think he manages, actually. Clark’s very proud, anyway.

Ellis lives and works at Miss Maggie’s gun range. His hobbies are weaponry, supporting the rainbow community that saved his life and helped him figure out who he is, and, of course, mooning after a certain ballet dancer named Bryn…

He also enjoys a good trip to Club Break to play with Clark, Daniel, Chance, Ryuu, and/or Lucian. They’ve all sort of adopted him; he is the pick of the litter among Clark’s Lost Boys. (Clark likes to bring home strays to nurture and restore to full health and life. Others include Jeffrey Ross, Neil of-many-piercings at Glow, and Garreth Black, who, admittedly, is more wolf than stray.)

Ellis’s nickname could be Earnest Ellis. He’s sincere and comes across as naïve until you get to know him better. I like to think he just has high hopes for humanity and thinks the best of them, despite his long list of experiences that should have proven to him otherwise.

There’s plenty more to him, of course, but you can read all about it in Earthquakes! And as always, if you happen to have questions for this character, please feel free to ask ‘em in the comments!

Thanks for reading, as always. Follow the BLOG TOUR to learn more about the characters of New Amsterdam.

And to win prizes.

‘Cause PRIZES, y’all. They rock.

Thanks for reading!
Xxoo

And definitely catch up with Ellis and Bryn in Earthquakes, the latest installment of the New Amsterdam series. Need a taste? How ‘bout an excerpt?

PS – It’s better to read it with the SOUNDTRACK.

Ellis had been close to martial artists when they were training. He’d sparred with Clark. He’d seen Kris and Daniel and all his friends shoot at the range. There was an economy of motion that the athletically and lethally inclined all shared. Ellis admired it, strived for it, and knew he’d never get there. He was a workhorse, not a prince of motion.

And as he watched Bryn begin to move – not merely stretch or contort but move – Ellis thought of churches and gods and houses of worship.

Bryn’s feet bent in ways Ellis had never seen. Bryn could balance perfectly on one foot or even a single toe. When Bryn shed his pants after a moment or two and took the first few steps in only a pair of snug briefs, Ellis wasn’t hit with a wave of arousal. He was struck dumb with awe. Every line of Bryn was defined. Even the lift of one arm and the point of his fingers were deliberate and beautiful. Ellis stood completely still and held his breath. He was in the presence of some sort of everyday magic and calling attention to himself might break the spell.

The concentration on Bryn’s face was unlike anything Ellis had ever witnessed. He didn’t exist for Bryn. Nothing did except the music, the motion, and whatever spirit had come alive in Bryn to make Bryn…shine. There was no other word for it. The light played through the windows and infused Bryn with incandescence.

And when Bryn started to dance, really dance, he outshone the sun. A turn here, a pointed foot there, a twist and a glide and… God, Ellis didn’t know what Bryn was doing. But he felt it. The music was hopeful and yet haunting, and Bryn’s dance tugged at every ache both old and new in Ellis’s body. Bryn’s face portrayed almost no emotion, but with every dart of his hand, every slice of his leg through the air, with every crumble, fall, and rise, Ellis was struck over and over.

I will try, said Bryn’s reach toward God and Heaven and all things on high.

Though I know I will fail, said the drop of Bryn’s arm.

I will carry on, said the sweep of his leg.

But I’ll lose, said an arch of his back.

I will fight, said a twisting leap.

I will fall, said the thuds of Bryn’s feet on the floor.

I want to love, said the open reach of Bryn’s fingers.

Bryn’s expanse of chest, his shut eyes, and his rise onto his curled toes snapped something in Ellis, and as the music faded, Ellis couldn’t take it anymore. He shut off the music, strode to Bryn, and caught Bryn up in his arms. Bryn was sweaty and warm and breathing hard. Ellis couldn’t stop kissing him. Bryn melted against Ellis, resting heavily against him. Ellis ran a hand through Bryn’s hair.

Ellis Parker is a lucky man: he escaped his persecuting family, survived his tour of duty, and met Maxwell Clark in the city of New Amsterdam. Clark showed Ellis more than the ropes: Clark helped Ellis figure out who he is – a gay submissive with a massive fixation on a beautiful, mysterious ballet dancer named Bryn Rothe. Ellis knows a Good Man when he sees one, and he wants nothing more than to score a first date with Bryn.

Little does Ellis know that Bryn has a violent past that is crawling out of shallow graves to haunt him. Even his hectic schedule and beloved stage aren’t enough to distract him. It’s impossible for Bryn to figure out how he feels about Ellis with his demons between them, but when Ellis saves Bryn not once but twice, Bryn is forced to admit that there’s something about Ellis that Bryn might not merely want but need.

Together, they journey to the scene of Bryn’s original crime – Charles Towne, South Carolina. There they will dig up secrets that might explain Bryn’s tortured life but might also be his – and Ellis’s – un

Own a Piece of the City – Get your copy of Earthquakes: A New Amsterdam Story, Today! 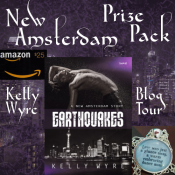 Kelly has brought a has brought a giveaway for a $25 Amazon Gift Card, a necklace, and a free ebook copy of the novel. There will be one winner announced at the end of the blog tour.

Winner will be selected at random after the contest closes on the 18th of March.

Contest Fine Print from Kelly:
This giveaway will run throughout the blog tour, and finish at midnight on March 18. Winner must be of legal age, and legally able to accept the prizes as awarded. By entering this giveaway, you are confirming your eligibility. Void where prohibited by law. Entries will be collected by Rafflecopter on each tour stop and via my blog post. No purchase necessary to win. Odds of winning are determined solely by the number of eligible entries. Winner must respond within seventy-two hours of the congratulatory email and post. Posts will be made on my social media platforms. Winner may or may not be announced on the blog sites, in accordance with that site’s preference. It is the responsibility of the winner to watch for the announcement. A new winner will be redrawn otherwise. Shipping costs will be to the expense of Kelly Wyre, and can be shipped worldwide, where legally permitted. This contest is not sponsored by Blogger, Amazon, Facebook, Goodreads, Twitter, Tumblr, or any of the sites wherewith the giveaway has been posted. By entering this giveaway you agree to hold Kelly Wyre and designates harmless should something go awry with either contest or the prizes awarded.