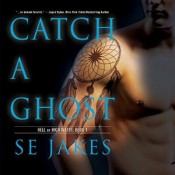 A spook and a cursed man.

Prophet doesn’t want a partner, but his boss isn’t giving him a choice. Tommy, the Cajun, is suspicious and annoying as hell. Prophet wonders how long until he’s gone too. Then they’re handed a case, one that hits close to home for Prophet. An old friend was found dead and it’s Prophet’s and Tommy’s job to find out how.

Even before he was paired with Prophet, Tommy was skeptical about the guy, thanks to the strange video that showed up in his email. The bossy, grumpy man borderlines insane, but Tommy can’t ask for much more, seeing as every one of Tommy’s partners has come victim to his bad luck. Maybe if he can keep a distance with Prophet, the man won’t be affected.

When the case leads to an underground fighting ring in which Tommy sacrifices himself to go undercover, tempers flare between Prophet and Tommy and so does passion. Secrets and close calls threaten to tear them apart before the case is solved and before wounds are healed.

Catch a Ghost is the first book in S.E. Jakes’ Hell or High Water series.

The combination of mercenary, luck, and hot monkey sex makes this story intriguing and, believe it or not, charming at the same time. The push/pull that the characters constantly struggle with is the whole of this book, and I’ll be honest, I wanted the story to end differently, but knowing that there is a continuation to this storyline in the second book helps.

Tommy and Prophet are awesome, not only as a couple but individually as well. While they both seem incredibly put together and stubborn, it’s the things that make them vulnerable and open, especially to each other, that I found so personable and intriguing. Prophet, especially, holds a place in my heart. He’s beyond broken, beyond stubborn, but when he shows himself to Tommy, I melt. He cares more than he wants to and that’s why he pushes people away. For Tommy, I absolutely love the voodoo curse air about him. Bad Luck. He’s tense, but out of the two, he’s the more open with who he is and why he is the way he is.

The tension between Tommy and Prophet is off the scales. I love that they don’t exactly hate each other in the beginning, but they are wary. Still, Tommy will follow Prophet to the depths of hell because that’s what a partner does. They run from their attraction, but still it’s always between them so when it does finally detonate it’s nuclear and oh-so-fabulous.

As for the story, the investigation into Chris’s death and the journey through the underbelly of Houston is as exciting as it is suspenseful. The author does a good job balancing the romance and the mystery.

I liked the narrator. This is the first time I’ve listened to Adam North but he was good enough. The only thing I found a little niggling is his pronunciation of a few words, like “debriding” and “helo” and that he drops tense a few time, moving from past to present—however unintentional. The pacing and voices were spot on though. I especially enjoyed his version of Tommy, although I’ll be honest in saying that at first I did not like it at all, but over time, the slow drawl grew on me.

Overall, I love this story, whether reading or listening. The audio is as great as the storytelling and is definitely worth it. I definitely recommend the audiobook of Catch a Ghost by S.E. Jakes, narrated by Adam North.