Audiobook Review: Covet Thy Neighbor by L. A. Witt 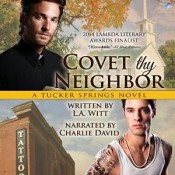 Seth owns the tattoo shop near his apartment. His neighbor is moving out leaving a vacancy and Seth is concerned about who will be moving in. His day brightens when he sees Darren checking out the place. Darren is gorgeous and has the perfect type of humor that pulls Seth in. Seth has a great feeling about his new neighbor until Darren reveals that he is a Christian minister.

Seth was disowned by his religious parents and now lives his life as an atheist. He has no use for the religion and the followers that cast him aside. But the chemistry with Darren is amazing and Darren keeps showing Seth that he’s not at all the same as those that turned their backs on him. But Seth knows there is no future with Darren as their views are just too different, or are they?

Covet Thy Neighbor is the fourth book in the Tucker Springs series and the books are designed to stand alone. Seth was introduced briefly in a previous book, but there would be no continuity loss reading this one on its own as the books are framed by the town that the characters live in.

This book deals with faith and its many layers. Seth has definite beliefs about religion after his conservative family disowned him. He was rejected by everyone and it stemmed from their church and their faith. Seth grew up going to the church that eventually shunned him and he firmly believes that all Christians feel the same way as that has been his only exposure. When he meets Darren, Seth sees someone that challenges some of those beliefs as Darren does not fit the same pattern or share the same beliefs as his family members.

Darren knew from early on that he had a calling for the church and, while his own family was resistant at first when he came out, they eventually came around. Darren has liberal views and, combined with having Seth give him a tattoo and then getting high with him, challenges Seth on many levels.

When the guys meet they fall into bed quickly. The morning after, on several occasions, both men are uncomfortable and Seth is trying hard not to become attached to Darren. This then didn’t help them to connect to each other and then didn’t help me to connect to them as a couple. After they get physical with each other early on in the book, the story then slows down to allow for all of the back story to evolve. We don’t get much on Darren until the end of the book when he tells Seth some of his story and he was an underdeveloped character for me.

For a novel, this was a shorter one and there was a lot that it attempted to cover. The religion was of course the biggest issue, but then there was a tangent of working on clients with HIV in Seth’s tattoo shop and then a story of a transgender teen within the Christian church. These stories were only touched upon and it was a lot to take on within this one book. The author also attempts to show that there is more than one way to have faith and attempts to show the struggles of both characters and where they fit into several groups as defined by society. Seth does question how they will make it work in the long run and at the end I did too.

The writing itself isn’t an issue, as Witt has a proven record. From my perspective this particular book tried to deal with a vast subject in broader strokes and overall it wasn’t the right book for me. If you enjoy the author’s work and are looking for a book with a religious topic this may then be the right book for you.

Charlie David was a good choice as a narrator for this book. He voiced Seth with a deeper, raspy, sexy tone and Darren had just enough of a difference in voice to make them distinct. There were not a lot of secondary characters, which worked in the audio’s favor as those characters did all sound the same. The overall production met my expectations as the pacing was well done with good sound quality. David makes it easy to get into the flow of listening to an audio book and his voice was a good addition to the series.