Audiobook Review: There’s Something About Ari by L.B. Gregg 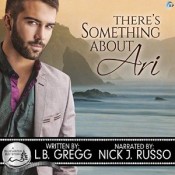 Buck never fit as a kid until he met energetic, colorful, and hyperactive Ari on the playground. After one conversation, Buck was in love. Ari was constantly in trouble throughout high school, but the two were the best of friends with Ari spending time at Buck’s house seeking refuge from his unstable mother. Buck never told Ari how he felt and he also never told him that he was gay. Buck thought he had his future planned out until his mother died and then, on the same day, Buck left town without a word.

Five years later and Buck is struggling to raise his teenage brother, Charlie, but they are holding it together. He has had no time for relationships and has found some pleasure with many nameless men over the years. Buck’s life has been on hold, but Charlie comes first and he wouldn’t change it.

That is until Ari comes back to town. Ari is all grown up and he is successful and confident as the star of the new TV show filming in Bluewater Bay. The small town is buzzing with the return of the troubled boy that made it big, but Ari is solely focused on making things right with Buck, the boy he has always loved.

There’s Something About Ari is the second book in the Bluewater Bay series and can stand alone. The focus here is more on Buck and Ari’s friendship, with the TV show and the Hollywood lifestyle remaining on the periphery.

This is the second novella I have listened to by L.B. Gregg and her strength is providing character development with fewer words. We start with Buck and Ari at their first meeting as children and, while their friendship is told in an overview style, we get a good sense of them. Buck has been so busy in his role as big brother that he doesn’t have time to process his loneliness and the hurt he still feels about Ari leaving. When Ari returns, he expects to pick back up where they left off and then take their relationship even further. Buck isn’t going to forgive quite so easily and there are stories and circumstances that have yet to be revealed.

Gregg creates a full cast of characters that all feel real even with minimal page time and Buck and Ari’s world is fully realized. There were a few areas that I did need more to fully round this story out for me. I needed more back story on how Ari actually became an actor and I also needed more from the guys as a couple. This ending was similar to another novella from Gregg where the characters just get together and then it’s all over.

What really enhanced this story was the narration from Nick J. Russo. He also narrated the other novella I mentioned from Gregg and Gregg’s words, coupled with Russo’s delivery, are an excellent match. Russo handles every character expertly and with nuances that make each character come alive. From the main characters, to Buck’s brother, to an intoxicated sixteen-year-old girl, Russo delivers. There were a couple of words that sounded incorrectly pronounced and I had to stop to gather the context within the story, which was the only area that made this performance just shy of perfection. This is a true friends-to-lovers story that fits perfectly into a shorter time frame with superb and seemingly effortless narration overall.