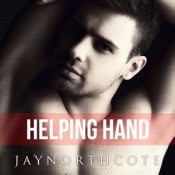 Jez and Mac are roommates and attend university together. After too much partying last year left Jez broke and Mac with poor grades, both guys have decided they are going to spend their nights at home instead of going out. As a result, the friends are spending much more time together alone in the house while their roommates are out.

One night the guys are watching porn together and decide to have a mutual wank. Jez finds himself much more interested in what Mac is doing than watching the screen, however. When he was younger, Jez fooled around a bit with other boys at school, but he chalked that up to being in an all male environment. But now as he and Mac spend many evenings together jerking off, Jez is realizing that his interest in men is more significant than he thought. However, Mac definitely doesn’t identify as anything other than straight, so Jez tries to play it cool to avoid scaring him off.

I listened to this in audio and I thought Mark Steadman did a great job with this. His tone and narrative voice fit well with college guys and he captures the informal camaraderie, as well as the sex scenes, really well. The voices aren’t super distinct among the characters, but I could tell who was speaking so it worked fine for me. The book was easy to listen to in audio form and it was a nicely paced story.

Overall I found this one to be fun and entertaining. As I said, this is a story heavy on the sex, but Northcote does a really nice job holding it all together and I enjoyed it. I think it also worked well in audio form. Veronica reviewed this one in print form and she liked it as well, so we can recommend it in either format.