Guest Post and Giveaway: Wolf, in League by A.F. Henley

Today I am so pleased to welcome AF Henley to Joyfully Jay. Henley has come to talk to us about a new release, Wolf, in League. Henley has also brought along a tour wide giveaway. Please join me in giving Henley a big welcome!

Hello, and welcome back to the Wolf, in League blog tour and giveaway! It’s an honour and a pleasure to have you here with me on Joyfully Jay, celebrating the release of my new novel. Releasing a new novel always seems like it’s going to be more of a bang than it tends to be (Where was the kaboom? There was supposed to be an earth-shattering kaboom!).

Sure, we look forward to them, kind of like we look forward to Christmas morning, but when the release actually rolls out, instead of getting the six-year-old’s version where we run down the stairs and tear open gift after gift and eat ourselves sick, it tends to be more of a parental version of Christmas morning—running around and working your butt off to make sure everybody is having a good time. Although, if my mother’s words can be trusted (and I’m pretty sure they can) it’s as worth it for every author who sits back and watches their blog tour and/or release events go by as it is for a parent who gets to watch their kid enjoying the moment.

For those of you who have been following along with the tour, thank you, and I hope you’re having a lot of fun with it. For any newcomers, welcome, and by all means please jump in and enjoy yourself also!

As with the rest of the Wolf series’ release tours, I’ve been handing out “tiny teasers” of the novel. And while I can’t wait for you to read what I’ve got for you, I want to remind you to follow through to the end of the post to learn how you could win the Wolf, in League giveaway. One lucky winner, tour-wide, will be awarded their very own signed, print copy of Wolf in League, a “crystal and silver” diamante Howling Wolf Pendant, and a $20 gift certificate to the Less Than Three Press book market.

My heartfelt thanks to Joyfully Jay for hosting me today, and another great big one to you for joining me. Best of luck with the giveaway and I hope you enjoyed the post!

And now, an exclusive teaser, and a romantic moment between Wolf’s newest set of “husbands”…

Matthew was pulled into the living room where his lower back was encircled by Gavin’s left arm and his left hand was lifted and clasped by Matthew’s right hand. “Put your other hand on my shoulder,” Gavin whispered, as if they were in the middle of a ballroom surrounded by people instead of in the quiet of their own living space. “Now get closer,” Gavin said, bringing their bodies together. “Bring your feet almost between mine, like we’re twining our legs. It’s a dance, not a boxing match.”

“So I’m supposed to be rubbing up against all your good bits, am I?” Matthew asked skeptically. He was smiling, though.

“Of course. That’s the best part.” Gavin looked into Matthew’s eyes and for a second, it was like Matthew was seeing them for the first time again. So strange but oh, so fascinating.

“Now what?” Matthew asked, more breathless than he would have liked.

“I start with my left foot, you with your right. I go forward, you go back. We slide the other like so.” He nudged up against the toes of Matthew’s right foot, stepped forward as Matthew stepped back, and then showed Matthew how to slide the other on an angle until both feet were lined up, but a foot or so apart. “Then we simply bring our feet together again, stepping the first foot to the second.”

They completed the step together and Gavin whispered, “Voilá. Not so hard, right?”

“No.” Matthew eyed him. “But for some reason I don’t think that’s all there is to it.”

They did, and surprisingly enough, the steps got more fluid with each one they did. Before Matthew even realized what Gavin was doing, Gavin was putting a slight turn in each step. And once Matthew got the hang of that, Gavin simply made the turn more elaborate and pronounced.

Gavin shrugged casually. “Not really, actually. Someone who’s really good at it would try something like this every few rounds.” He suddenly let go of Matthew’s waist, pulled away, then flourished his arm out into open space and stood there, feet together for a pause. “They would also say that your hand should be on my arm and not around my shoulder.” He stepped back in and brought Matthew close again. “I just can’t quite figure out why anyone would want to do that, though. This feels much nicer, don’t you think?”

He did think. But he didn’t say so. Instead: “Wouldn’t we look the pair trying to dance like this in one of the clubs?”

“We’d be the most watched couple there,” Gavin countered. “And they’d know we were actually a couple, wouldn’t they? Not just a bump and grind that we came across on the floor. It takes time to match somebody else’s step like this.”

It’s been months since anyone at the Committee has had any contact from the O’Connell family or their pack members, and they are not happy. Suspicious of the activities that took place in D.C. and determined to find out what the wolves are up to, the Committee recruits one of their newest residents, Doctor Matthew Dietrich, to play the part of neighbor and infiltrate the family.

Matthew has always been a keep-to-himself kind of person. Though idealistic and optimistic, he prefers to work in solitude, at night, while he researches the findings that he hopes will one day change the world. When he’s approached by the executives of the Center, he has no idea why they’d choose him. And to say he is skeptical over the concept of men that can shift into wolves would be an understatement. Until he meets his new partner, the man that will play the part of his “husband” in the Committee’s scheme, Doctor Gavin Strauss. 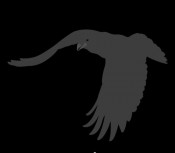 Henley was born with a full-blown passion for run-on sentences, a zealous indulgence in all words descriptive, and the endearing tendency to overuse punctuation. Since the early years Henley has been an enthusiastic writer, from the first few I-love-my-dog stories to the current leap into erotica.

A self-professed Google genius, Henley lives for the hours spent digging through the Internet for ‘research purposes’ which, more often than not, lead seven thousand miles away from first intentions but bring Henley to new discoveries and ideas that, once seeded, tend to flourish.

Henley has been proudly publishing with Less Than Three Press since 2012.

For more information, please stop by for a visit at afhenley.com. 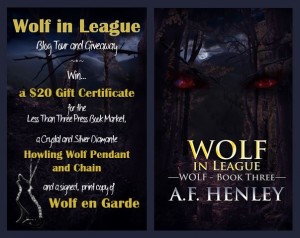 On behalf of the tour, please join the giveaway by taking part in the Rafflecopter below. The prize consists of a signed, print copy of Wolf in League, a “crystal and silver” diamante Howling Wolf Pendant, and a $20 gift certificate to the Less Than Three Press book market.

For all the terms and conditions, please check out the t’s and c’s posted on the Rafflecopter.

** Please note that this giveaway is being offered tour-wide and there will be one winner awarded for the entire event.