Audiobook Review: Let the Wrong Light In by Avon Gale 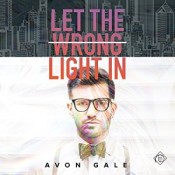 Avery is a junior architect and he’s trying to get one of his proposals noticed by his boss, Malin Lacroix. Avery’s designs keep getting passed over and he finally storms into Malin’s office demanding answers. Avery realizes not everything is quite as he believed and after taking Malin’s criticisms to heart, his next design is accepted. Avery is elated, except it also means that he has to work closely with Malin and his thoughts are all over the place about that.

Avery sees Malin as cold and uncaring until an encounter in Malin’s office heats things up. The men start a physical relationship filled with kink, but with no communication and no rules it’s impossible to determine who is getting what out of their time together. Avery’s friends are concerned and he slowly realizes that maybe this isn’t exactly the best situation for him, but he can’t seem to distance himself from wanting Malin.

Malin is closed off and even after Avery spends time with him, he’s difficult to get to know. The relationship is all on Malin’s terms and for a while Avery is so caught up in being with Malin he doesn’t even realize how one sided it all might be. But, Malin has never recovered from his past where one moment changed his entire life and he needs to put that to rest in order to move forward with Avery.

Avery is the main focus here and the book is through his eyes. He comes off at first as self centered and, while that much might be true, he’s also impulsive and can’t imagine filtering what he says. He drives most of the people he knows crazy with his constant chatter and one liners, but that’s all part of his appeal. That’s also a large component of this book and how initial impressions don’t tell the entire story.

This was Gale’s debut book and the strong point for me was getting to know Avery. He’s comfortable with who he is, but sometimes his focus is split and he needs to be reeled back in. Avery is the one that makes the first move on Malin and their relationship developed from there. The beginning seemed haphazard as there are were several secondary characters that Avery interacts with and he’s bouncing all over the place, but we come to see that is his personality. I did have some issues with the way the relationship developed and what was exposed and when.

Avery is looking for someone to dominate him and Malin does just that. But, everything is on Malin’s terms, Avery has no idea what may be coming next, and they have zero communication about it. When they are together, Malin takes to hitting Avery in the face often and although Avery didn’t know exactly what he wanted, he’s not getting much out of getting punched in the mouth. They don’t talk about anything and when Malin feels like hitting him with a belt, he does that too. Avery keeps waiting for Malin to talk to him about something but he never does and while a self-styled relationship is of course fine, Avery has no idea what is going on most of the time. Even later into their relationship there was little discussion of the dominance between them and it was that lack of communication that didn’t sit well with me.

It takes a long time to get the story on Malin. We know that he’s never been with a man before and that is not explored any further than that information. And even after his story comes out, his sexuality isn’t discussed much and I would have liked more on that. His story also had a few details that really didn’t add up and, while it didn’t affect the overall story, it did affect that portion of it.

Avery definitely grew on me but I had a harder time with the relationship here as so much was omitted. If you are interested in Gale’s earliest work that would then be the reason I would suggest this.

Derrick McClain narrated this audio and I think I enjoyed this book much more for having listened to it. He has a tone that was easy to get into immediately. He had distinct voices for Avery, Malin, and all of the secondary characters that sounded natural as well as age appropriate. He also had great timing for Avery. The audio itself is well done and the pacing and overall quality where excellent. If you are interested in this one, I would recommend the audio version.