Today I am so pleased to welcome R.J. Scott (writing as Rozenn Scott) to Joyfully Jay. R.J. has come to talk to share an except from her latest release, Snow & Secrets (Stanford Creek #3). She has also brought along a gift card to give away. Please join me in giving her a big welcome!

Garrett Campbell ducked his head as another round slammed into the rocks above them. The bad guys were way too close and he cursed his stupidity at not calling for backup earlier.

“We’re talking about this now?” he snapped at Emmet who, like him, was ducked low behind the only freaking rock they could find.

All it would take was for the insurgents to realize they were out of ammo and they’d flank them and it would be over. They’d been cut off from their SEAL team and there was no way out of here. They had to hope and pray that the SEALs were out there doing whatever crazy shit they did to save the two idiot translators stuck on a mountainside.

“It’s never the right time,” Emmet said, and pressed his other hand on top of the first that was already covered in blood. “It’s a gut shot, but even with those you run out of time,” he added, and coughed. “And you won’t listen to me apologize again.”

“You have nothing to be sorry for.”

Emmet looked at him with tears of pain in his eyes. “It was all for the best,” he mumbled and his eyes shut, his mouth slack.

“Fuck you, Emmet,” Garrett snapped. “Wake up.” He tapped Emmet’s cheek and Emmet opened his eyes, blinking at him, and for a second everything narrowed to this point in time. His friend needed medical attention, and soon, and he was pale and in agony, and he was still talking, albeit slurring.

Garrett could do this for him. He could talk his heart out until the world was put right.

“Like I’m in one place long enough to find a man, let alone fall in love with him.”

“Have a normal life, find your dancer.”

The guns had silenced and he knew that it was just a matter of time before the men with the weapons and intention to kill would begin to circle around, cautiously checking behind the rock, finding two men one with a stomach wound so severe that he wasn’t going to get out of here, and the other with a bullet in his lower back, and pain that radiated up his spine. He knew it was nearly time, Emmet knew it was nearly time, and yet there was a cautious acceptance and a hesitant smile on Emmet’s lips.

They’d been friends for over five years now, ever since Garret signed up for the translating contracts. Five years of having each other’s backs, and it had all gone to Hell.

“That little guy, the one you had a photo of…on… your phone.” Emmet coughed again, and this time the cough didn’t abate, even though he was desperately keeping it in.

“Yeah, the singer, ass…” he coughed and there was blood there. He wiped it away, his hand shaking. “…and smile and dance moves.”

Garrett saw the blood, counted down the seconds until his friend’s death.

“Not again, you want to hear it all again?”

Emmet nodded, blood on his lips, his eyes half closed.

“Yeah, my sister is marrying Tyler’s friend, I told you that story a million times.”

Forcing back fears that threatened to steal his voice, at the anguish and pain on Emmet’s face, at the fact they wouldn’t see another day, he told Emmet how one day he would find Tyler. How he’d and tell him about the poster the guys had put up on his wall. About the teasing, and the stories. He’d tell Tyler exactly what he felt, about how he had a stupid lusting crush on him, and he wouldn’t hold back on a single detail. The promise was an easy one to make; they weren’t getting off this mountain alive.

That was a bad sign, the language foreign but the meaning simple. They know we’re out of ammunition. Dead. Ours. We won.

And meanwhile Emmet was dying, and Garrett was so cold in the half light of early morning. When the first attacker appeared, lips drawn back in a snarl, cautious with his gun held straight in front, Garrett sighed quietly. He’d kind of known this was how things would end for him, ever since he signed on the dotted line as a translator.

He tipped his chin and looked at the man who would be killing him in the eyes, steady and sure; he wasn’t afraid to die.

But he had regrets that were acid inside him.

That he’d failed on this last mission.

That he couldn’t save Emmet.

That his family would never know who he really was.

And that he never once got to kiss a cutie who moved and sang like Tyler Hart.

Secrets could kill him. Will trusting another keep him alive?

Garrett Campbell is a man on the run. Wounded in the line of duty he returns to a town that is the only place he feels safe. When danger threatens to follow him there he has to run; only he appears to have picked up an unwanted guest.

Tyler Hart needs some down time, with the press hounding him after a failed relationship, he is desperate for peace. It seems like Stanford Creek may well be the place to go. After all, it worked for his friend Cody. Unfortunately, his timing is off, and he finds himself on the run with the very sexy Garrett Campbell.

First comes trust, and then comes love. Now they just have to stay alive. 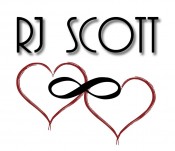 RJ Scott is the bestselling gay romance author of over ninety MM romance books. She writes emotional stories of complicated characters, cowboys, millionaire, princes, and the men who get mixed up in their lives. RJ is known for writing books that always end with a happy ever after. She lives just outside London and spends every waking minute she isn’t with family either reading or writing.

The last time she had a week’s break from writing she didn’t like it one little bit, and she has yet to meet a bottle of wine she couldn’t defeat.

R.J. has brought a $15 Amazon or ARe gift card to give away to one lucky reader on her tour. Just follow the Rafflecopter below to enter.