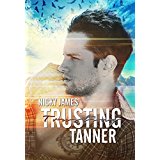 Zander is a teacher at a preschool and loves his job. One day, a gorgeous man comes in with his sweet little niece. Tanner wants to enroll little Anna in the program. Tanner has come to help his sister with Anna, and since he’s just come out of a long term relationship (and business co-ownership), starting over seems like a good idea.

There is an instant attraction between Zander and Tanner. They even discover they enjoy the same online role playing game. However, Zander is in a long-term relationship of his own, so they decide to be friends, and only friends.

As the story begins to move along, we find out Zander’s relationship is not a happy one. Zander’s boyfriend, Paul, is abusive. Tanner is mortified and wants to help his friend, who he realizes he’s falling in love with, leave Paul. Unfortunately, a lot of Tanner’s efforts are more damaging than if he’d let things be.

Can Tanner convince Zander to trust him enough to help and be the man he can lean on?

I have mixed feelings about Trusting Tanner. I love Tanner. He’s sweet, loyal, and he has good intentions. He’s a softie in a rough, tattooed body. He wanted to act on his connection to Zander right away. Even when Zander told him he was in a relationship, Tanner still wanted to be his friend. He’s the kind of guy everybody needs in their life.

Poor Zander. He tries to balance his work life, his growing friendship with Tanner, and his efforts to keep Paul happy so he won’t burst into rages and hurt him. He’s afraid, and even after he escapes his apartment in his pajamas after Paul goes crazy, he goes back because he’s convinced he knows how to handle the situation. I began to get frustrated with Zander as the story went on because he knew he was in danger. He knew he had a support system, and he even acknowledged he’d fallen out of love with Paul a long time ago. Please don’t think I don’t realize it’s so difficult for victims to actually leave their abusers. I know there is fear there, and I would never dismiss that. I think the frustration I felt was not because he wouldn’t leave. It was because I hate that he’s being abused at all. Nobody deserves that, and it’s sickening that the abusers seem to avoid any sort of punishment unless they damn near murder their partner (or worse).

There were some very uncomfortable moments where Tanner tried to help Zander by confronting Paul. He thought he was doing a good thing, but he wound up making things worse. I was freaking out because I knew exactly what was going to happen to Zander because of Paul’s anger. The fallout that occurred was ugly, and I cried over it quite a bit. I feel like I’m giving away a lot of the plot, so I’ll stop at that.

Trusting Tanner moves pretty slowly, and there were times I found myself skimming a little here and there, and even though Tanner had romantic feelings toward Zander, there was no actual romance between the two until nearly the end of the book. I would go so far as to say this was a story of friendship, rather than an actual love story. It was well written, though. Nicky James’s writing style is smooth with a lot of detail, and wow, she can write angst!

Trusting Tanner is a good book, and I recommend it to fans of friends to lovers stories, slow burns, and friendship. However, I will leave you with a warning there are potential triggers, and you should be aware of that. If you can get past them, it’s worth the read.