Today I am so pleased to welcome Kelly Wyre and AF Henley to Joyfully Jay. They have come to talk to us about their latest release, Breaker: Exile, Volume 1. They have also brought along a great giveaway. Please join me in giving them a big welcome!

Welcome to the Breaker (Exile, Volume 1) Blog Tour and Giveaway! We’re both super excited about this new release and thrilled to be able to share it with you. Throughout this tour, we’re going to be introducing many of the characters within, and associated with, Exile’s bizarre shores, as well as introducing Exile itself. Then we’re going to top that off with a quick little teaser.

However, before we get into any of that we wanted to remind you that we’ve got a couple of awesome giveaways going along with the tour so be sure to read through to the end to find out how you could win either a Silver-plated Starfish Anklet (just by leaving a single comment!), or the grand prize of a signed, print copy of Breaker, a coordinates bracelet with the Believe. Seek. Prove. reminder so you can always find your way back to the island of Exile, and a $20 gift certificate to the Less Than Three Press book market.

AFH: True. We don’t want anyone thinking I’m a weirdo—

KW: You think they’re only going to start thinking that now?

AFH: — we should probably start talking about the next character who is one of MY faves. Rivet. (God, I love that name.)

KW: It really is one of the better ones, absolutely. What’s your favorite random factoid about our mainland dude?

And just like that, we’re back in weirdo land. Not that we ever really leave, I suppose…

Before we leave you to the rest, please allows up to give a great big thank you to Joyfully Jay for hosting us today, and another to you for joining in on the fun. Best of luck with the giveaway and we hope you enjoy the post!

“So,” Rivet drawled, his smile growing. “You were going to an island. To figure out your Estrangement.”

“Kind of, yes.” Eddie frowned at Rivet’s expression. “You find that amusing?”

Rivet took a long breath and finally lifted his vapor stick back to his lips. He pushed off the wall, took a few steps, and then turned back. When he answered, Rivet wasn’t looking at Eddie. Instead, he stared at the wall. “What I find amusing is that sometimes when we are in our most need, we manage to miss the things that are right in front of us. We go blindly toward the obvious because we are panicked by the obscure.”

A smile grew around Rivet’s dangling vapor stick. “I’m trying to say that maybe what you’re looking for is right in front of your face.” He waved at the wall when Eddie continued to stare at him. “Open your eyes, Eddie. The first step is to believe.”

Eddie licked his lips, tried to ease the frown of his face, and kept his voice light. “In?” 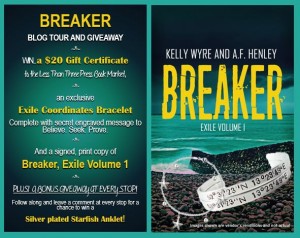 He reached for Eddie’s wrist, caught it even though Eddie tried to pull back, and drew Eddie away from the wall. With one hand, he turned Eddie towards the brick, and with the other he pointed.

Images, letters, numbers, and symbols had been painted on the surface with meanings that Eddie had no way to decipher. Swirls, lines, and circles of red, green, blue, and yellow had been formed into words and pictures that told the tale of a street life that Eddie didn’t know. Graffiti, done in both painstaking ambiguity and haphazard clarity had transformed the simple, crumbling brick into a work of art. And in the middle of the chaos rested the words of a legend:

In the wake of several near-cataclysmic events, humanity created the Cure, a DNA-altering antidote to death by disease and old age. But all cures come with side effects: a small percentage of the population develops a wide range of powers, some of which are lethal to others, and some which are lethal to the wielder.

These people are called the Estranged, hunted and shunned, safe only on the Island of Exile. It is here that Kaeva and Eddie meet—and where they set a prophecy in motion, quite possibly sealing their own demise, and even the end of Exile.

Notes: contains some explicit content and includes thoughts and discussions of past and potential suicide

Kelly enjoys reading and writing all manner of fiction, ranging from horror to romance. She used to work in advertising but is now happily chained to her writing desk and laptop. Kelly relishes the soft and cuddly and the sharp and bloody with equal amounts of enthusiasm. She’s a coffee addict, a workaholic, a chronic night owl, and loves a good thunderstorm. Currently Kelly resides in the southeastern United States.

Henley was born with a full-blown passion for run-on sentences, a zealous indulgence in all words descriptive, and the endearing tendency to overuse punctuation. Since the early years Henley has been an enthusiastic writer, from the first few I-love-my-dog stories to the current leap into erotica. A self-professed Google genius, Henley lives for the hours spent digging through the Internet for ‘research purposes’ which, more often than not, lead seven thousand miles away from first intentions but bring Henley to new discoveries and ideas that, once seeded, tend to flourish. Henley has been proudly publishing with Less Than Three Press since 2012.

On behalf of the tour, please join one, or both of our giveaways.

Simply leave a comment below to be entered into a random giveaway for a silver-plated starfish anklet (and whatever else we can stuff into the envelope). Winner will be selected by random number at the close of the grand prize giveaway, one winner per blog post.

Also, enter the Rafflecopter below for your chance to win a signed, print copy of Breaker, a coordinates and message bracelet, and a $20 gift certificate to the Less Than Three Press book market.

For all the terms and conditions, please check out the t’s and c’s posted on the Rafflecopter.

** Please note the grand prize giveaway is being offered tour-wide and there will be one winner awarded for the entire event.