Audiobook Review: Fish Out of Water by Amy Lane 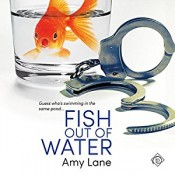 Private investigator Jackson Rivers barely survived a shooting eight years ago. That’s not the worst part. No, worse is that he’d been an undercover cop on a sting to nail other dirty cops—and a fellow cop took him out. Now he works as an investigator for a law firm, and he’s desperate to help his “foster” brother Kaden, when he’s set up for a cop killing. Kaden’s a family man running two businesses. He’s not a drug addict and he’s not a killer. He doesn’t trust the police, not since Jackson’s shooting and the hullabaloo that caused. But he’d never shoot a cop. He’d been arrested, while unconscious at the scene, and his tox screen was tampered with.

Jackson recruits Ellery Cramer, hot-shot litigator from the firm to represent Kaden, because he knows Ellery won’t kowtow to cops or the DA. And Kaden’s life is definitely in danger. Both witnesses to the shooting are already dead, and Jackson and Ellery each have bullets flying in their close proximity. To keep each other safe, and dig as deep as they can as fast as possible, they work together—which is personally uncomfortable because both Jackson and Ellery share a mutual attraction. Jackson’s a free-spirit, out-and-proud bisexual, and Ellery’s, well, he’s repressed but very much gay. And Jackson can’t imagine why a high-brow wealthy guy like Ellery would find his flashback-having, blue-collar, ex-cop self to be anything special.

I absolutely coasted through this audiobook. The narrator’s voice is appropriately low and gruff for Jackson and the rotten villains, and still able to modulate between Ellery’s cultured voice and the more high-pitched female characters. The pace was perfect, with excellent voice-acting in all the right parts. My headphones are substandard—so my hubs was curious what I was listening to that involved the use of so many F-bombs. I had to chuckle. Just some down-and-dirty sexytimes, I told him. And, there is just a bit of that. The story is really more mystery/suspense, in the vein of a legal thriller with a dash of a love story. The attraction simmers—as much as it can for a book that spans (mostly) five days. And, when Jackson and Ellery chase the disappearing leads to find who set up Kaden, it brings Jackson’s shooting right back into question. This full-circle plotting made the coincidences between Jackson’s and Kaden’s cases natural and organic, and I really liked how it all came together.

Both Ellery and Jackson are men I’d like to spend more books with, and that’s hopefully the case. The end seemed mostly HEA—with a cracked door that makes me think Ellery and Jackson will continue to work closely together and, someday, open their own firm. Or, maybe that was just me wishful thinking… In the meantime, if you like suspense/thrillers with racially-charged murder cases and horrifying police aggression and corruption, well, this is your book. I couldn’t stop listening—even though it was Christmastime and I had pressing elf duties.