Caesar Serrano is at a party when he meets the sexy Nate Reilly. The guys hit it off right away and it doesn’t take long before they are back at Nate’s house for a hot hookup. The next morning, however, Caesar realizes he is in big trouble as it turns out Nate is LAPD, while Caesar makes his living breaking into people’s houses. As much as Caesar enjoyed his time with Nate, he knows that way lies trouble, so he figures it will be the last he sees of the gorgeous cop. But when Caesar stumbles upon evidence of a horrible crime during his latest burglary, he has no idea where else to turn and goes to Nate for help.

Nate is upset to hear that Caesar lives on the wrong side of the law, but he is also determined to help protect Caesar when he brings him the evidence he found. Things become even more complicated when they realize the perpetrator is a cop. Nate is supposed to help keep Caesar safely hidden away while Internal Affairs looks into things, but with a cop involved, it is not easy. And while both men know that getting together is not a good idea, the close proximity is making it hard not to act on their attraction to one another. With the bad guy still on the loose, the men have to work to stay one step ahead of those who want to silence Caesar. And maybe if they make it through the case, there is hope for a future together. 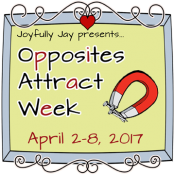 I originally read The Good Thief years ago when it was first released, and it seemed like a great choice for Opposites Attract Week with the pairing of the cop and the thief. This is a story I haven’t re-read and the book is about seven years old, so I was curious how it would hold up over time. I have to say I was impressed that this story still works well, even years later. There were a few small places where the book felt dated, like references to a “new” movie that is now old, or a teen girl using a boombox (honestly, even in 2010 I can’t imagine too many middle class girls still had boomboxes), but it was only a few small things and nothing that detracted from enjoying the book. If I hadn’t been specifically reading with an eye for this issue, I would have probably noticed even less.

This story fits just perfectly with our opposites attract theme as the central conflict between our guys is that they are on the opposite side of the law. The chemistry between them is intense, and these guys want each other almost from the start. But they also both know it is a bad idea. For Nate, being a gay cop is already hard enough; dating a criminal is pretty much an impossible idea. And of course, Caesar risks arrest just by revealing what he does for a living, and certainly he knows he can’t continue stealing while also being with Nate. Buchanan does a great job showing this struggle between head and heart (or head and groin as the case often is here). The story is very heavy on the sex, and actually I think that works well here. Because these guys are battling with themselves, both knowing they should be staying away from one another, but at the same time the attraction is so intense that they can’t stop themselves from giving in. And as the book continues, we move from just the physical connection, to a romantic and emotional one as well between these guys. So there is a nice conflict here that really shows these guys figuring out how to make it work when by all accounts their relationship should be impossible.

The other conflict in the story is the crime Caesar stumbles upon and how they deal with the threats to Caesar after it is reported. I love that even though Caesar is pretty unapologetically a criminal, at the same time, he risks his own safety by reporting this horrific crime because he knows he can’t let it continue. So there is a suspense angle to this story as well as the guys try to stay one step ahead of those that want to silence Caesar and keep him from testifying about what he found. I think the ending here could have been a little more intense, as this part of the story wraps up a tiny bit low key after the suspense is smoldering through much of the book. But overall I like the way Buchanan balances the relationship with the investigation plot.

So I am really glad I picked The Good Thief up again after all of these years. The story holds up well and I really enjoyed the cop and criminal dichotomy. Caesar and Nate are super sexy together, so if you are looking for a steamy story with some light suspense and an opposites attract theme, definitely check this one out.

Note: MLR Press is giving away a copy of The Good Thief in our big Opposites Attract Week giveaway, so be sure to check that out if you want a chance to win.