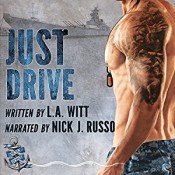 Sean lives in the small Navy town of Anchor Point with his father, who has been a career military man. Sean drives a cab while attending college and one night he picks up Paul in more ways than one. A drive to no particular destination culminates in a hot hook up that neither man can erase from their mind and it’s not like they are trying.

Paul has just broken up with his boyfriend and in calling for a cab, he meets Sean. Sean is twenty years younger than Paul, but he definitely knows how to take control when it’s needed and Paul certainly is in need. One night with Sean and his thoughts of his ex are all but erased, but Paul has some hesitations.

Paul is not usually interested in younger men, but he can’t stop thinking about Sean. One night turns into weeks as the men meet for regular hook ups and then think about expanding their relationship outside the walls of the hotel room. But it’s on one of these very outings that they realize that Paul is Sean’s father’s commanding officer and that drives their budding relationship to a screeching halt. But Paul craves Sean and not being with him is messing up his concentration and his job may suffer either way. Paul has to decide whether all his years in the Navy are a trade he can make in exchange for a life with Sean.

This book has all the things I enjoy about an L.A. Witt novel. This particular book has great characters, military men, Witt’s signature heat, and was just enjoyable to listen to. The book opens with a despondent Paul getting into Sean’s cab and without a specific place in mind, Paul tells Sean to “just drive.” Paul has just walked away from another relationship and while it had run its course, it’s never an easy thing to do. At 42, Paul has spent more than half of his life in the Navy and while he wouldn’t trade his career, his personal life has suffered.

Sean knows a few things about the Navy as well, as he has spent his life moving around for his father’s Navy career. Even though Sean is not in the military, his life has always been dictated by the rules of the Navy and dating an officer, specifically a commanding officer directly in his father’s chain of command, is completely off limits.  But when the men meet, they have no idea of any connection they may have and the heat these guys generate within hours of meeting each other is intense.

The story overall is fairly easy. The guys spend a night together and then just can’t seem to stay away from each other as the early part of their relationship has them meeting in hotels. Witt spins the age difference here with a welcome change of pace, with Sean, as the younger man, being the one that likes to be in control and these guys do not hold back at all.

The guys just fall into a natural rhythm. There were some early concerns for the guys with the age difference, but it’s not the focal issue. The biggest issue comes when they learn of their military connection and there doesn’t seem to be a way to make a relationship between the two of them work, although they are a perfect fit.

There were a few areas I would have liked more of, including a few more lines about Sean’s relationship with his mother, what he was actually studying in school, and then seeing Paul and Sean outside of their hotel rooms as a couple although for a good portion of the book they cannot be seen in public together. Those were small concerns however, for a really engaging book with two men that had great chemistry.

Nick J. Russo was the narrator here and I have come to expect a solid performance from him. His basic narrative voice is familiar for as many audios as I have listened to from him, but his voice is pleasant to listen to. He doesn’t offer a range of character voices and here Paul seemed to have a character voice, yet Sean was voiced in the basic narrative tone and there wasn’t a lot of distinction. Also, the other men in the book were just given a deeper voice that had a forced quality at times. Russo’s style is part reading the story and part voiced characters, but his portrayal of the intimate scenes adds to the performance. I would recommend either version of this book for a story that is easy to fall into.