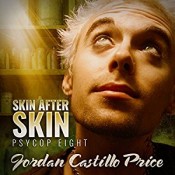 Curtis Ash—Crash to his friends—is a stylist at Luscious, an upscale salon. He thinks he has his life pretty made, and then Red Turner, the new colorist, walks in the door. The connection between them is palpable and immediate, but Red doesn’t seem interested. But a friendship emerges between them nonetheless. Red encourages Crash to look beyond the physical world, and to embrace the possibility of psychics. But when things go sideways, Red walks away without a backward glance.

Though that stings, Crash begins to reorder his life. And while he’s doing that, he also begins to realize that psychic powers actually do exsist. Embracing that for himself is harder than he thinks, but his hours of research and practicing pay off. But when the thing he wants falls through, he’s disillusioned. And also loses his new boyfriend, Jacob Marks, in the process.

But Crash will not be knocked down and he begins yet again. Fully embracing everything he’s learned, he finally has his life in a good place. But the universe isn’t done messing with him, and a series of misfortunes seem like they’ll be enough to break him. But with Red suddenly back in the picture, and a better outlook on life, Crash can take those hard turns, and make them another new start. Crash is good at change, and this is just another new start in life.

For Self Published Book Week, we have a double whammy. Not only does Jordan Castillo Price self publish the Psy Cops series, but she does the same with her audios. In fact, she launched a successful crowdfunding campaign in order to get this particular audio made. The author spares no expense in producing a quality audio, and Gomez Pugh does a fantastic job as narrator.

Skin After Skin is the eighth book in the Psy Cops series. If you’ve been reading along, you have no doubt who Crash is. I might be in the minority, however, when I say he’s never been one of my favorite characters. He’s brash and flirty, over the top, with only moments of humility and sincerity. Or so I thought. This book spans from a couple of years before the first book in the series, all the way up through the most recent, and it is all about Crash’s journey. His growth and change as he navigates his life. I am so glad I got to know Crash better. He has layers that, for me, didn’t really come through before. And now that I see all he’s gone through, all the struggles and sacrifices, changes and rebirths, I enjoy him so much more than I ever thought I would.

I really appreciated everything he went through, and the way he grew and changed as a result. He was open to reordering his perceptions and world view, and he was way more analytical and poetic than I expected. There’s a depth to him that grew throughout the novel as well, really fleshing out his character and making him substantial and important in a way I didn’t anticipate. This is his story, through and through, and it’s about his changes and growth. The romance, such as it is, is only one part of that. But I didn’t have a problem with that, as it only enhanced the larger story and highlighted Crash’s growth.. So I really enjoyed following along on his journey.

My one issue is that this book is long. Very long. The length itself isn’t a problem, per se, but for me, at times, the pace dragged. I felt like the information we were being given got a bit repetitive at points, and that some sections could have been condensed to tighten up the narrative. It may be because I was listening to it, as opposed to reading it, that it felt longer than it did, but since I didn’t read this one as well, I don’t have a comparison. But for me, even though I was enjoying, at times it felt like it would never end. And not always in a good way.

Listening to this book, though, was a real treat. Pugh does a great job, and has a smooth voice that’s easy to listen to and get lost in. I’ve only listened to a couple of books in the series, but Pugh is fantastic about consistency. Crash, Jacob, Vic, Caroline, as well as others, have a beautiful consistency throughout the series. I will make mention that several secondary characters didn’t work as well for me. Crash’s mother, for example, was particularly grating. I get what Pugh was trying to convey in her tone, to really showcase the kind of person she is. But it didn’t hit my ear well and I cringed every time she showed up. There were also some weird, lengthy pauses between chapters that had me checking to make sure the audio hadn’t stopped. But in the grand scheme, those things are minor. Pugh does a wonderful job, and I really enjoyed the long hours I spent with him telling me the story.

So overall, I can definitely recommend this one. You could possibly read, or listen to, this book without having read the rest of the series, as it’s almost a step removed. But I think it really enhances things having read the series as well. And if you’re a fan, then you’re definitely going to want to pick this one up.

This review is part of our Reading Challenge Month for Self Published Book Week! Leave a relevant comment below and you will be entered to win one of seven fabulous prize packs from an amazing group of self published authors. Commenters will also be entered to win our amazing grand prize sponsored by Dreamspinner Press (a loaded Kindle fire filled with DSP books!). You can get more information on our Challenge Month here, and more details on Self Published Book Week here, including a list of all the prizes being offered this week. And check out our prize post for more details about the awesome prizes offered this month!