Today I am so pleased to welcome Nic Starr to Joyfully Jay. Nic has come to talk to us about her latest release, Patrick’s Savior. She has also brought along a great giveaway. Please join me in giving her a big welcome!

How secondary characters develop a life of their own

When I first started writing Charlie’s Hero, I sat down and fleshed out my main characters. Josh and Charlie feature in that story, and their character profiles included understanding their personalities, giving them careers, and families, and friends. I gave them backgrounds and backstories, and physical characteristics. They evolved into fully fleshed out characters who lived with me for quite a while.

No-one lives in a complete vacuum. Most people have others involved in their lives, even if contacts are at a very basic level. My characters interact with their friends, families and colleagues. These secondary characters appear in various scenes, they share important moments in the story, and they usually offer support and advice. Of if they are antagonists, they provide points of conflict.

As Charlie’s Hero evolved, as Charlie introduced his work colleague to his broader group of friends, we got to meet Patrick, the star of my current release, Patrick’s Savior. Patrick developed his own character as Charlie related stories about Patrick’s antics at work and the trouble he got into – Murphy’s Law definitely applies to Patrick! Then Josh brought his friend, Simon, a fellow paramedic, to a celebration dinner, and it was obvious Patrick and Simon really hit it off. This was the first hint they might get their own story as I found myself wanting to bring them together.

In Charlie’s Hero, I needed to create a few situations where Josh proved he was a hero to Simon by doing small, but good, deeds. The idea presented itself that Patrick would be in some kind of trouble, and Josh would suggest a solution to his problem. Thus, Josh suggested Patrick move in with Simon, who was looking for a housemate, which at the same time alleviated Charlie’s worry about his friend. The stage was further set for Patrick and Simon to have their own storyline.

I ended Charlie’s Hero knowing that Patrick’s Savior would be written but Andrew’s Promise had to come first. Patrick and Simon appeared briefly in Andrew’s story too, especially as there was some overlapping timeline with the first book and it was wonderful validation that readers fell in love with the couple as much as I did. I’ve had so many readers ask when they’d be getting Patrick’s story! It took me a while, but I got there in the end. So, a big thank you to everyone who waited so patiently for this book. I hope you enjoy Patrick and Simon’s story.

How do you find love when someone doesn’t want you to be happy?

Patrick Edwards is dealing with a double whammy. Unwanted attention from his housemate’s boyfriend is making him feel uncomfortable in his own home, and he’s facing uncertainty with his employment as an administrative assistant at the local elementary school. He finally breathes a sigh of relief when a friend puts him in contact with Simon, who has a vacant room.

Simon Dawson is a paramedic who doesn’t hesitate to help Patrick. After all, no one should live in a house where they don’t feel safe. Simon develops feelings for Patrick, but doesn’t act on them—Patrick’s moved from a bad situation and doesn’t need his new housemate hitting on him. However, a weekend away changes everything when Simon realizes Patrick returns his feelings.

But someone doesn’t want Patrick and Simon to be happy. A series of strange letters arrive at the house, and things will get a lot worse before the two men get their happily ever after.

Patrick’s Savior is a novel of approximately 69k words. It is part of a series but can be read stand-alone. 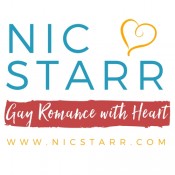 Nic Starr lives in Australia where she tries to squeeze as much into her busy life as possible. Balancing the demands of a corporate career with raising a family and writing can be challenging but she wouldn’t give it up for the world.

Always a reader, the lure of m/m romance was strong and she devoured hundreds of wonderful m/m romance books before realising she had some stories of her own that needed to be told.

Nic loves to spend time with her family—an understanding husband, two beautiful daughters, and a cherished Cairn terrier. Nic is a foodie and wine lover who lives in the city but is a country girl at heart. When not writing or reading, she is often found indulging in her love of cooking and planning her dream home in the country.

Nic has brought a $20 Amazon gift card to give away to one lucky reader on her tour. Just follow the Rafflecopter below to enter.