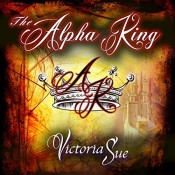 Askara is a world divided. Packs of wolf shifters vie with one another for control of territory; alphas compete for omegas who bring gifts like foresight, truth telling, or other blessings that can benefit their packs; and humans keep their heads down and try not to attract unwanted attention. Humans, in this world, are slaves, having lost their power and their personhood long ago in ancient wars between the species.

Luca is the alpha-heir of a small pack driven to ruin by a greedy council. His fate, and that of his people, depend on which omega he chooses at the ceremony. There are many promising females, but Luca is hoping for a male omega. He’d take a female if he had to, but it wouldn’t be his first choice. The gods, however, have a sense of humor and Luca ends up claiming an omega who happens to be… human!

But Kit is more than the lowly slave he seems. He is a human omega, and by bonding with Luca he turns the alpha werewolf into the Alpha King! A werewolf of unmatched power who rules not just one pack, but all the packs. In theory, at least. There are those who would stand against Luca and his human mate.

It’s up to Luca to prove his strength and his right to rule. But Luca wants to do more than just rule the wolves and humans, he wants to change the world while he’s at it. Not too big a task, when one is all-powerful. If only everyone else would believe in him half as much as Kit does.

Luca is a young man who has been subservient to his pack’s council for much of his life. He’s had to accept other people making decisions for him and his people — such as choosing who to marry his beloved sisters to even against his own wishes — with the only support he has being that of his best friend. It colors his actions throughout the book; he is strong and aggressive one moment, passive the next. He gets better, growing into his position and his power. It’s interesting to see an alpha male — pun unintended, I assure you — start out weaker and end up getting stronger, as opposed to having a strong alpha grow weaker once he finds his soul mate.

Kit follows much the same arc, with passive moments conflicting with a few flashes of strength. Unfortunately, Kit remains weak through most of the book. I liked Luca, but I wasn’t a fan of Kit, and found their relationship to be a bit too one-sided for me. Kit is the weak point of this story, reacting to scenes rather than being an active part of them. When he hears rumors about Luca and another omega, his first reaction is to run away forever. In the snow, because of course. Many of Kit’s actions in the book made me sigh and and shake my head, especially since there was a moment or two when he had flashes of character and strength that were undermined by those weak and silly moments.

Because this book takes place in an Omegaverse world, male pregnancy is the centerpiece of this book. Luca needs an heir and Kit is woebegone because he can’t give it to him only… miracle of miracles, he can! This leads to multiple scenes dealing with what it’s like to be pregnant. The weight of a pregnant belly, having to pee, being uncomfortable, having to pee and having to pee. There is a lot of time devoted to Kit having to pee in this book.

There was an interesting take on shifters in this story. The world building was promising… what little I got to see of it. More pages were spent on dresses and jewelry and how pregnancy made Kit have to pee every three pages than there was on the society. This was an okay book, and if you’re into male pregnancies, this is a book that takes it seriously and treats the subject matter as if it was both real and mattered. I give it points for that.

But… for me, it’s the narrator that made this book work. Joel Leslie didn’t just read this book, he attacked it. He put everything into this book, giving voice to every emotion. Growling in anger, snapping with cold disdain, he embodied an alpha. Somehow he even managed to bring Kit to life with a breathy, delicate tone. His enunciation reminded me of the old movies I used to watch at my grandmother’s with every clear, crisp words. He bit out sharp t’s and k’s, he snarled out his r’s, and manged to avoid any hissing s’s. Victoria Sue, has already written a sequel to The Alpha King, and I hope she manages to get Joel Leslie back for the audiobook.