Guest Post and Giveaway: Coastal Magic and The King’s Courage by Charlie Cochet

Today I am so pleased to welcome Charlie Cochet to Joyfully Jay. Charlie has come to talk to us as part of the Coastal Magic Convention Blog Tour to talk to us about her latest release, The King’s Courage. She has also brought along an excerpt to share, along with a great giveaway. Please join me in giving her a big welcome!

Hello, all! Thank you so much for joining me here today at Joyfully Jay to celebrate the Coastal Magic Convention, one of my favorite conferences of the year! Next year will be my fourth year attending, and it’s one I always look forward to. Not only does it provide a warm, welcoming, laid back atmosphere, I always have so much fun hanging out with readers, catching up with fellow authors, and attending all the fabulous events. 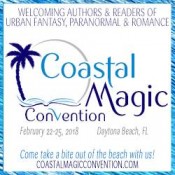 Next year will be even more awesome with an event I’m hosting with three fellow authors whom I adore: Poppy Dennison, Mary Calmes, and Victoria Sue. Take Your Alpha to the Beach will be filled with goodies, giveaways, gift baskets, and more. Come chat with us about the exciting new releases we’ll have coming out, or just stop by to say hi. I’ll be sure to post more info on Facebook and my blog as we get closer to the day, along with my event schedule.

In 2018 I won’t be attending as many conferences as I did in 2017, and that’s because I have some pretty exciting stuff planned for next year, including a new romantic suspense series which I plan to share more of at Coastal Magic!

In November I had the final book in the main THIRDS series release, Tried & True, and now as 2017 comes to a close, my final release of the year is The King’s Courage, the final book in the North Pole City Tales series. I’ve had so much fun writing this sweet little holiday series, but the time has come to leave the Rein Dears to their true loves. Also being released is the paperback edition of all six North Pole City Tales stories. So join Dasher, the King of Frost, and the rest of Kringle’s dashing flyboys for one last romp in the snow.

“Do not linger in doorways. It’s rude.”

There was no reply, and Eirik waited in silence. As expected, Dasher came to stand beside him. Eirik turned, ready to reprimand the bothersome elf, but was stilled by Dasher’s troubled expression. Eirik’s growing anger swiftly subsided, much to his annoyance.

“I’m sorry if I upset you,” Dasher said quietly. “It wasn’t my intention.” He stared off into the distance. After a moment of silence, he turned to face Eirik. “Say the word, and I’ll never pester you again.”

Eirik opened his mouth to reply as Dasher met his gaze. Something in Dasher’s eyes gave Eirik pause. This was his chance to rid himself of the elf once and for all. Why was he not pouncing on it?

“Or maybe you’ll consider spending the occasional moment in my presence. Would that be so terrible?”

Eirik pondered Dasher’s words. “What is it you want from me?”

“Nothing,” Dasher assured him.

“I am the spirit of all winter. The King of Frost. Why should I entertain such a ridiculous request?”

Dasher’s warm smile reached his eyes. “Even a king can use a friend.”

Eirik was at a loss. This was absurd. All he had to do was say the word and Dasher would be out of his hair for good. The Christmas elf was many things, but he was an honorable elf; that much Eirik knew. It was a noble virtue. If Eirik asked him to leave and never pester him again, Dasher would do so. The thought had a lump forming in Eirik’s throat, and for some unfathomable reason, his heart was at war with his head. Dasher was giving Eirik what he wanted. Why wasn’t Eirik taking it? It <em>was</em> what he wanted, wasn’t it? To be left alone?

“Did you inform Jack as I ordered?” The words tumbled out of his mouth before Eirik could stop them. That’s not what he’d intended to say. He’d meant to send Dasher away for good. Eirik cursed his traitorous heart.

“He was worried, so I told him your pelisse wasn’t properly fastened and you are seeing to it.”

Eirik nodded. Dasher had eased Jack’s worry when he’d had no reason to. Instead of simply relaying Eirik’s message and leaving Jack to whatever conclusion he might come to—which would most likely be that Eirik was once again avoiding everyone—Dasher had assured Jack that Eirik’s disappearance was due to a minor wardrobe malfunction. It was no grand gesture, but it meant more to Eirik than Dasher could possibly know.

Eirik cast him a sideways glance.

With a heavy sigh, Eirik turned, his eyebrows shooting up to his hairline when Dasher reached up and straightened his pelisse. He ran a hand over the white silk, smoothing it down.

“There,” Dasher declared, smiling up at Eirik. “Your pelisse has been seen to.”

Clearing his throat to regain some form of clarity, Eirik turned toward the doors. “I’m ready to return.”

They returned to the ballroom the same way Eirik had gone. He resumed his seat at his throne, and Dasher was about to sit on the floor as he had before, but Eirik scowled at him.

“What are you doing?”

“You are no one’s pet. Do not act like it.” He pointed to the seat to his right. “Elves with manners sit in chairs.”

Dasher blinked at him before quickly taking a seat. “Will no one mind my sitting here beside you?”

Dasher chuckled. “Right. King and all that.”

Eirik held back a smile. “Yes. King and all that.”

With the wedding of Jack Frost and Rudy Rein Dear only three weeks away, everyone travels to Jack’s palace in Svalbard, Norway, where the happy couple will exchange vows beneath the northern lights. Festivities have been planned leading up to the wedding, and Dasher eagerly anticipates not just the fun, but staying under the same roof as the blustering winter spirit who’s caught his eye—the King of Frost, Jack’s father.

A long-ago tragedy has left Eirik fearing to ever love again. As the King of Frost, Eirik maintains his distance from everyone, especially the young Christmas elf who insists on intruding on Eirik’s solitude. But Dasher is determined to find a way to show the lonely king that his heart still beats and he shouldn’t fear allowing it to beat for another.

Charlie Cochet is an author by day and artist by night. Always quick to succumb to the whispers of her wayward muse, no star is out of reach when following her passion. From adventurous agents and sexy shifters, to society gentlemen and hardboiled detectives, there’s bound to be plenty of mischief for her heroes to find themselves in, and plenty of romance, too!

Currently residing in Central Florida, Charlie is at the beck and call of a rascally Doxiepoo bent on world domination. When she isn’t writing, she can usually be found reading, drawing, or watching movies. She runs on coffee, thrives on music, and loves to hear from readers.

Charlie has brought a $15 Amazon Gift Card to give away to one lucky reader. Just leave a comment at the end of the post to enter. The contest ends on Monday, December 11th at 11:59 pm ET.