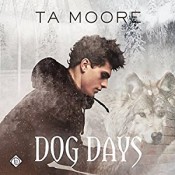 Some people call it the end of the world. Tornadoes destroying London, New York melting under a scorching heat wave, and Russia all but buried under snow. Crops are dying, water is vanishing, and many people around the globe are struggling to merely survive. But it’s not the end; it’s just… a change. It’s time for Fenrir’s people to return from the far north where they have lived in exile and return to claim the world humanity has thrown away. It’s winter, and the wolves are howling.

Danny is a sport; a dog in a pack of wolves. Always in the shadow of his sister who was born a true wolf, always the butt of the joke, the victim, the outcast, the unwanted, he finally had enough and left his family behind in order to find a new home with the humans. He lives in the Scottish Highlands as a professor. He has an apartment, a job, a life. He’s alone, and lonely, but routine keeps him busy. It’s fine. It’s all fine and he’s fine until one winter night brings the past back to haunt him. Jack, his one-time protector, almost-friend and lover, shows up on his doorstep.

The Numitor, king of the werewolves beyond the wall, had twin sons. His wife refused to say which was the elder and took that knowledge to her grave. Jack and Gerald have been snapping at each other for advantage and rank ever since. With their conquest of the world ahead of them, Jack’s father has sent both of his sons south. The victor, the heir and next Numitor, will be the one living son who returns. So long as he is in town, Jack thought he’d say hello to Danny, catch a snog and a tumble in the sheets before killing his brother and heading home.

Needless to say Danny is neither pleased nor interested in letting Jack have his way. He may be only a dog, but he has his pride. Unfortunately, there are more than wolves out hunting in the snow. Bodies have appeared, torn to pieces and left to rot; a strange, ghostly form that’s not quite wolf and not entirely human has been stalking them, threatening Danny and those he’s chosen to protect. The snow keeps coming down harder and power lines are out. He’ll need Jack’s help if he’s to protect his friends and his territory from a killer.

Danny has many qualities that you might associate with a dog: loyalty, obedience, submissiveness, and the ability to forgive. His ex, Lisa, cheated on him with her current boyfriend, but he still cares for her. He’ll do anything he can to protect her and her idiot boyfriend even though, by rights, he should simply wash his hands of both of them. He and Jack parted on difficult terms, but when Jack puts his hand on Danny’s neck and demands a kiss, or obedience, Danny finds it difficult to refuse. He still has feelings for Jack, very complex ones, and he’s bred — on both the dog and wolf side — to obey a stronger and more dominant male. On the human side, he’s been lonely, and Jack reminds him of the safety and security of having someone at your back, someone you can trust and rely on, someone who will, for once, protect him.

When Jack’s around Danny becomes a bit of a sullen doormat, pushing and snarling at Jack because he knows the wolf will put him in his place. He resists because he wants and needs the discipline, to be reminded that Jack can and will overpower him, take charge of him. Danny’s a submissive both sexually and emotionally — not weak by any means and not passive in the least — but he needs that connection with Jack. It makes him feel safe, it makes him feel like he belongs to someone, like a dog to its owner or a wolf to its pack. It’s something he couldn’t get from Lisa who, as his girlfriend, he felt a need to protect and cherish.

Lisa was a decent enough girlfriend until she cheated on Danny, citing his lack of intensity and commitment. She wanted more aggression and passion in the bedroom, but Danny didn’t want to hurt her and so always held back, both physically and emotionally. When Jack arrives and all but pisses on Danny to let Lisa know that the dog shifter belongs to him, Lisa feels a sense of relief. It’s not her fault Danny couldn’t be what she wanted; he was gay! Her emotional coldness and constant whining were enough to make me pleased she was the ex-girlfriend already, but that bigotry and rationalization — using his sexuality as a justification for her cheating on him is somewhat vile. I get making the ex unpleasant; it’s easier to write them off or have bad things happen to them when the reader isn’t attached, but this felt a bit heavy handed.

Danny agreed with her, both because he wanted to end the conversation — a naked Jack was smirking behind him (Lisa chose a poor moment to come and try to make peace) — and because it was also somewhat true. She wasn’t what he truly wanted in a mate, couldn’t be a true partner to him, but it also meant that when Danny was anxious to get back to her I had trouble understanding why. She cheated on him, and then blamed him not being straight as the reason it was okay for her to cheat. Without the end of the world and without Jack showing up, I wonder if Danny would still have done all the favors she asked of him just for that ghost of companionship.

Jack is not a nice guy. He’s shameless — having never done anything he needs to feel shame for — and ruthless. He knows Danny’s weaknesses and his buttons and will use each and every one to his advantage. This is his first time away from home, his first time without a pack surrounding him, so to combat the loneliness and isolation he goes to the one person he knows is this far south of the wall. Danny is familiar, obedient, and convenient. But there’s more than that. Jack wants Danny back. His childhood friend and lover, his dog. Someone who will be loyal to him and him alone, someone who is both pack and yet someone who belongs just to Jack. Jack isn’t the most introspective person and relies more on gut instinct than thinking, but every time Danny asks him to do something, Jack does it.

The pair of them compliment each other. Danny is more thoughtful and cautious in comparison to Jack’s charge ahead behavior. Where Jack needs loyalty, Danny needs a master. As children they were neither of them emotionally mature enough to understand what it took to be a separate person, both tied to their identities as members of the pack. Having time apart, having time away from the pack and each other they are both able to realize that the pull they feel to one another isn’t just the pull for companionship; it’s the pull for their other half. Jack came to Danny not because Danny was another shifter, he came because he wanted Danny and what Danny could give him. Danny let Jack in because he needed what Jack offered and wanted who Jack was, arrogance and flaws and all. Despite their snarls and snappish moments, I thought they made an adorable couple, even if it did take the end of the world to bring them back together.

The idea of dog shifters as opposed to wolf shifters is interesting and I love Moore’s take on it. Their religion felt like a mix of old Celtic druids — blood sacrifices and unforgiving gods — with a dash of Norse Vikings. Fenrir is one of their deities, the god who promised to one day give them the world, and he’s the one they curse or murmur appeasements to in the cold winter. There’s more mysticism and fantasy than I had expected from an end of the world book, but it works with this story and is handled with a deft touch.

I was given a copy of the audiobook for this review and I really appreciated McClain’s reading. The book takes place in Scotland and McClain spoke with such a believable accent that I would have thought he was a native. He managed both Jack’s arrogance and Danny’s surliness very well and managed to bring life to Moore’s world. I highly recommend the audible version of this book.