Audiobook Review: In the Wreckage by Hailey Turner 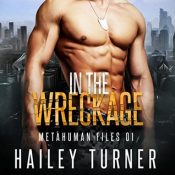 Jamie Callahan was an elite military operative when his team was attacked by terrorists wielding the chemical Splice. While most of the group died, Jamie is one of the rare humans who have the genetic make up to survive a Splice attack. Those who manage to live are changed, however, their DNA altering to give them rare powers as metahumans. In Jamie’s case, he has enhanced strength and endurance. Now, three years later, Jamie is the leader of Alpha Team, a group of mostly metahumans who work for the Metahuman Defense Force. They are a group of elite fighters who handle some of the toughest jobs around.

When Jamie wants to burn off some steam one night, he goes looking for a hook up in a civilian bar. There he meets Kyle Brannigan and the two have an incredibly hot night together that leaves both men wanting more, but knowing they can’t have it. The men are shocked when it turns out that Jamie is assigned to fill the sniper spot on Jamie’s team. Now a future between them is even more difficult, given that Jamie is Kyle’s supervisor on the team, but that doesn’t stop the men from longing for one another, and ultimately the temptation is too much for them.

But Jamie and Kyle face larger problems than breaking the fraternization rules. A terror group is seeking to take out researchers who are close to finding a cure for Splice and Alpha Team must step in to take them down. It is a dangerous mission and one that everyone may not survive.

In the Wreckage is the first book in the Metahuman Files series and I am SO excited it came out in audio as I have been dying to check this series out and I was not disappointed! The story had me captivated right from the start with it’s mix of futuristic tale, combined with high suspense, and a super sexy relationship between Jamie and Kyle.

First off, Turner does a wonderful job with the world building here. This a futuristic, somewhat dystopian story about a world post disaster. Turner blends these two concepts in really interesting ways, and we get enough detail to make the world come to live without being bogged down in too much information. I am a huge super hero fan, so I loved the incorporation of the super powers into the story and the scenes where the team fight the bad guys using their abilities were among my favorite parts of the book. Turner takes sort of a wild concept and grounds it in a way that makes it all work and I loved the little touches about how their abilities play out and affect them.

The story is exciting and intense and there is a nice balance of the suspense and investigation side of things with the romantic and relationship side. I am just going to say right now, this story is hella sexy. There is an intensity to the interactions between Jamie and Kyle that is just scorching, with a bit of a dominance vibe that works so well between them. I loved that these guys are all heat and passion and power when they are in the middle of things, and yet so sweet and tender and caring for each other the rest of the time. There is just a nice balance of hard and soft to their relationship and I could really see their connection and believe in them as a couple.

I’ll also add that I loved Kyle’s relationship with his adoptive brother, Alexei, another member of Alpha Team. They have such a lovely bond and a fierce loyalty to one another other. I loved the tenderness they have for each other and the small moments between them really enhanced the story for me.

As I said, I listened to this in audio with Greg Boudreaux, and once again he does a wonderful job narrating. I have listened to so many of his audiobooks (either as Boudreaux or his other recording name, Greg Tremblay) and it amazes me how I can lose myself in his narration despite having heard so many of his books. Boudreaux gets the intensity just right here and his narration fits the tone and the pacing of the story so well. There is a big group of folks here making up Alpha Team and the MDF staff and Boudreaux manages to make them all feel distinct, without going over the top on their voices. There are also a lot of accents to navigate and Boudreaux handles them all quite well and they felt very natural. He also gives great balance for the hot and steamy scenes, and the intense, suspense side of things and both areas work equally well.

So I can definitely recommend this story in both audio and ebook versions. The series is now complete, so if you are an impatient reader you can get them all in book format now. But I am eagerly awaiting the remaining audio and look forward to more from Kyle and Jamie, as well as Alexei’s story later in the series.