Today I am so pleased to welcome P.D. Singer to Joyfully Jay. P.D. has come to share an exclusive excerpt from her latest release, Concierge Service. She has also brought along a great giveaway. Please join me in giving her a big welcome!

Attracting the attention of a man like Craig Ridley isn’t easy. He’s wealthy and good-looking, and could probably seduce someone by reading the phonebook in his smooth baritone. He could have anyone he wants—and he doesn’t want anyone. Craig doesn’t call himself demisexual in so many words, but if he doesn’t like and respect the other person, he won’t be attracted.

He certainly doesn’t expect to become attracted to someone on staff at a New York City luxury hotel, two thousand miles from home. Craig’s a guest, and guests pay for their pampering.

Of course the evil author had to give Craig a love interest who’d be risking his job and his professional pride by getting involved with a hotel guest. Concierge Joshua Hannes has a lot of professional pride—if a hotel guest wants it and it’s legal, he’ll get it. He’s a man of connections, knowing where to find the rare and beautiful, or who can provide a service. And if he doesn’t know someone, he’ll do it himself.

So what is a paid-for service, and what is something a man would do for his partner? Where does one end and the other begin? Sorting this out keeps Craig and Joshua busy for most of a book.

This section is where newly-minted billionaire Craig Ridley has called down to the concierge desk at his five-star hotel to request a rent-a-friend, because he’s wired but tired, and lonely.

The rap at the penthouse suite’s door slightly after eleven jerked Craig away from the e-book he was reading with indifferent attention; if this was a thriller, he wasn’t nearly as thrilled by the text as he was by the interruption.

Perhaps he should have peeked through the peephole, but anyone who knocked on this door had to use the pass card in the elevator, soooo… He opened the door.

The vision he’d seen coming out of the suite earlier greeted him. Brown eyes under full brows, a perfectly straight nose over a sunny smile, wide shoulders dressed in a decent suit—the same label as the one Craig had treated himself to when he’d sold his first company.

He jerked his gaze back to his visitor’s face—a laser dissection of the visitor’s charms was just not okay. Not when Craig made it abundantly clear he wanted nothing but company. The guy was worth looking at—and an unknown quantity as to what kind of person he’d prove to be.

Ten seconds of admiration for the view. Would this stranger last longer once words started coming out of his mouth?

“I’m Joshua Hannes. You rang?” The smile faltered for a scant second.

Craig found his voice and the memory of why he needed it. “I’m Craig Ridley.” Oh, that was stupid, of course rent-a-friend would know that, but… “Didn’t I see you earlier?”

“You did. I arranged your dinner. Now I’m back. If that’s okay.” Joshua remained in the doorway, a bag dangling from his fingertips.

And he’d folded towel elephants, plural, one for each bedroom. A thorough man.

Oh, right, Craig was keeping him standing. He ushered his guest in. “Hope you brought the Scrabble board, or that there’s one tucked away in some yet to be explored corner here.”

“I don’t think so, but I found us a deck of cards. We could play gin rummy, or war, or go fish.” Joshua pulled the sealed deck from his bag.

“Definitely more social than watching a movie.” Craig slit the cellophane wrapper to shake out the cards. “Or we could talk politics and possibly have our first fight, or compare weight lifting routines if we both lifted… Sorry, I didn’t even think about going downstairs to the gym to burn off some energy—I’m exhausted but my body still swears it’s two hours too early to go to bed.”

“No problem.” His visitor’s smile looked genuine. “I brought some Izzes.” He found coasters in the sideboard inlaid with enough exotic woods to endanger an entire rainforest, and two cut crystal tumblers, which he filled with ice from a minifridge disguised as more finely milled cabinetry. “Pomegranate, blackberry, or peach?”

Craig studied a maroon can, searching for symbols. Packaging had betrayed him before. “Is this kosher?”

Joshua examined his own can. “It’s not certified, but it’s vegan. I checked. Is that close enough?”

Thorough, or thoughtful. Or both? “Sure is. Blackberry sounds good.” He poured and offered to clink his glass against Joshua’s peach drink. “To new friends.”

Josh gave him that look again, a nanosecond of I don’t understand. “L’chaim?”

“La kayim,” Craig agreed. Whatever that meant. Probably New-Yorkese. That gravelly consonant might just be another regional thing. Craig sipped again, the fruity bubbles dancing on his tongue.

Nice choice—Craig could appreciate the subtlety of not bringing wine or liquor. This wasn’t a date. What the hell did they do next? Cards, okay—another nice choice. Joshua hadn’t mentioned poker. Not when that could go lascivious. Not that Craig would mind in the least demanding shirts and trousers as forfeit.

Stop. That. One more stray thought and he’d have to adjust himself. The thin sweats he’d changed into for lounging wouldn’t hide a thing. Besides, where the hell had that thought come from? That was twice now. His interest hadn’t been piqued like this in years. 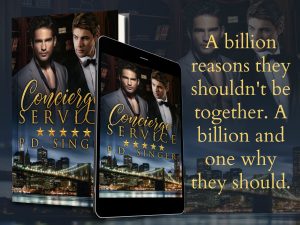 Joshua Hannes, the concierge of the Vivaldi Central Park Hotel prides himself on fulfilling every impossible request. Tickets to a sold-out show? A purple dye job for a purse dog? A last-minute table at a premier hotspot? No problem.

But the devastatingly handsome penthouse guest wants what?

Self-made billionaire Craig Ridley’s in New York on business, but at the end of the day, he wants to relax with someone interesting. The concierge should be able to supply a friendly face. Just for a little conversation. Dinner and a card game. Not sex with a man he doesn’t know or respect.

Craig didn’t expect the concierge to personally volunteer. Nor to be the man Craig hadn’t known he needed.

A smoldering standalone romance with an HEA.

P.D. Singer lives in Colorado with her slightly bemused husband, one tall young man, half a case of empty nest syndrome, and thirteen pounds of cats. She’s a big believer in research, first-hand if possible, so the reader can be quite certain Pam has skied down a mountain face-first, been stepped on by rodeo horses, acquired a potato burn or two, and will never, ever, write a novel that includes sky-diving.

P.D. has brought a great prize to give away to one lucky reader on her tour. Just follow the Rafflecopter below to enter.