Today I am so pleased to welcome Don Travis to Joyfully Jay. Don has come to talk to us about his latest release, Abaddon’s Locusts. He has also brought along a great giveaway. Please join me in giving Don a big welcome!

Don Travis’s Abaddon’s Locusts, released by DSP Publications on January 22, is a tale of Jazz, a young mixed blood Navajo, caught up in the sex trade traffic. In the excerpt below, our hero, BJ Vinson, and others have set up what they hope will be a sting operation to snare the elusive “Juan,” who apparently lured Jazz into the cartel’s clutches. Paul, BJ’s companion, offered himself as bait for a meeting at Albuquerque’s C&W Palace. So far, Juan hasn’t appeared, but a young woman sets her sights on Paul.

“Not much of a crowd tonight,” I noted. “At least not compared to the weekend.”

A pleasant, contralto interrupted us. “Cowboy, are you gonna save one dance for me tonight?” A tall woman with a complexion too dark for her long, ash-blonde hair moved to Paul’s side and clasped his arm.

He swept off his black Stetson and held it over his heart. “Why sure, ma’am. Yours is coming up next, as a matter of fact. My name’s Paul, and these other fellas don’t matter.”

She slapped his arm lightly. “Course they do. I’m Ellen. And you are?” She pointed at Gene.

She transferred her gaze to me.

“My name’s Burleigh,” I said, one of the few times this year I’ve revealed my true name.

“That is my Christian name. See what a burden I carry? Too heavy to waltz around on the dance floor. I guess you’ll have to rely on this Paul fellow here to carry that stick.”

The deejay obligingly put on a polka at that moment, drawing the two of them to the dance floor.

“What do you think?” Gene asked.

“Damned if I know. I was expecting Juan, but maybe they sent Ellen.”

Henry joined us from a nearby table where he had been keeping three Native American women giggling between turns on the dance floor.

“Any sign of that Juan fellow yet?” he asked.

“No Juan or Jose or whatever his name is, but Paul just met a gal trying to get in his pants,” Gene said, leaning back in his chair and watching the couple sweep around the floor. He sat up abruptly and put a finger to his left ear. “Hold on, I can’t hear you.” He stood and looked at us. “Too much noise in here to hear my bug. Gotta go someplace where it’s quieter. Be back in a minute.”

Henry watched Gene’s retreating back before transferring his attention to Paul as the couple swept past our table. “Not a bad looker. If Paul doesn’t want her, maybe I’ll give her a try.”

The music came to a stop with the couple on the far side of the floor. We watched as they spoke briefly. Then Paul took her hand and lifted it to his lips before turning and walking away. Although I was dying to hear what went on, I understood when Paul joined a table of mixed couples. Probably some UNM kids he knew. I caught a flash of movement at my side and turned to find Henry striding across the now vacant dance area toward where he last saw the blonde. Gene rejoined me at that moment.

“Somebody bugged Paul’s car. My man in the parking lot watched the maneuver and got a shot of the man. Not a good pic, but it’s enough to see it wasn’t Juan. He lookfamiliar to you?”

I glanced at the photo he handed me, but it was indistinct, especially in the low lighting of the nightclub. Unwilling to look at it by the small light on my keychain, I handed it back. “Can’t make it out. Anyoneyou know?”

“If I had to guess, I’d say it’s the Dominican arrested with Juan for kidnapping that kid a few years back.”

“My man said he got in a car and drove away.”

“No, too far away. But it was a late model Buick Le Sabre. Gold, he thought, but it’s hard to tell under these parking lot lights. Do we remove the bug?”

“We can always drop it in the parking lot. Maybe he’ll think he didn’t fasten it securely.”

“Maybe. Why don’t we just have Paul leave the car in some motel parking lot tonight?”

Gene nodded. “That’s the thing to do. Let’s wrap this thing up. Tell Paul to leave the car in the parking lot at the Holiday Inn Express on Hotel Circle. I’ll go on over there now and wait to bring him home.”

“Okay. Did you notice our guy with dreadlocks has vacated the premises?”

Gene looked around. “Lots of people have vacated the premises. It’s getting late. Past my bedtime.”

Henry arrived back at the table. “Did you catch blondie?” I asked.

I filled him in on our plan before heading for the men’s room, catching Paul’s eye as I passed the table where he was sitting. After a minute or so, he joined me in the vacant toilet where gave him his instructions.

Henry and I sat in the car until Paul pulled out of the C&W’s big parking lot. We allowed him some distance before pulling out after him. No one seemed to be following his rental, but they wouldn’t have to stay close, not with the locator bug they’d planted on his car. We followed him up Eubank until he turned off the main drag heading for the motel. Resisting the urge to stay on his tail, I drove north to pick up Montgomery Boulevard before turning west toward my North Valley home.

Then Henry and I sat and stewed for another hour before we heard a car pull into our driveway. A moment later, Paul let himself in the back door. I hadn’t realized how concerned I was until I saw his smiling face. My muscles relaxed so totally that I felt lethargic.

“I thought tonight was a bust until Gene told me my car was bugged,” he said. “Guess I got a good looking over.” He frowned. “But it must have been from a distance.”

“How was that blonde?” Henry asked. “I tried to find her after you two split up, but she must have left.”

“Persistent.” Paul laughed. “She sure wanted me to go home with her. Almost wouldn’t take no for an answer.” He sobered. “The strange thing was, I was kinda attracted to her.”

Bolting straight up in my chair, I exclaimed “Son of a bitch!”

Paul caught on immediately. “Be damned. That was Juan in drag, wasn’t it?”

Henry flushed. “No way. That was one fine-looking woman.”

I laughed at his obvious embarrassment. After all, he had been sniffing around after her in a pretty serious way.

“Paul, you held Juanito in your arms and let him get away.” 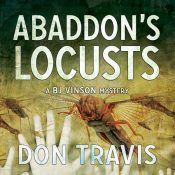 When B. J. Vinson, confidential investigator, learns his young friend, Jazz Penrod, has disappeared and has not been heard from in a month, he discovers some ominous emails. Jazz has been corresponding with a “Juan” through a dating site, and that single clue draws BJ and his significant other, Paul Barton, into the brutal but lucrative world of human trafficking.

Their trail leads to a mysterious Albuquerquean known only as Silver Wings, who protects the Bulgarian cartel that moves people—mostly the young and vulnerable—around the state to be sold into modern-day slavery, sexual and otherwise. Can BJ and Paul locate and expose Silver Wings without putting Jazz’s life in jeopardy? Hell, can they do so without putting themselves at risk? People start dying as BJ, Paul, and Henry Secatero, Jazz’s Navajo half-brother, get too close. To find the answer, bring down the ring, and save Jazz, they’ll need to locate the place where human trafficking ties into the Navajo Nation and the gay underground.

Don Travis is an Okie turned New Mexican. Each of his B. J. Vinson mystery novels features some region of his beautiful adopted state as prominently as it does his protagonist, a gay former Marine, ex-cop turned confidential investigator. Don never made it to the Marines (three years in the Army instead) and certainly didn’t join the Albuquerque Police Department. He thought he was a paint artist for a while but ditched that for writing a few years back. A loner, he fulfills his social needs by attending SouthWest Writers meetings and teaching a free weekly writing class called Wordwrights at the North Domingo Multigenerational Center, an Albuquerque community center.

Don has brought a $10 DSP gift card to give away to one lucky reader on his tour. Just follow the Rafflecopter below to enter.