Today I am so pleased to welcome Kate Hawthorne to Joyfully Jay. Kate has come to talk to us about her Secrets in Edgewood series. She has also brought along an ARC to give away! Please join me in giving Kate a big welcome!

Hey everyone! I’d like to start off with a huge thanks to Jay for letting me swing by today and tell you all a little about a HUGE Valentine’s Day giveaway that I’m a part of and also give you an exclusive first look at my new series.

First off, we all love free books, right? I’m sure you’ve seen the graphics and the links floating around on Facebook, but in case you haven’t…I’m one of over three dozen authors who came together to write some very special (and very FREE) Valentine’s Day stories. If you want to check them all out, you can click here –> https://claims.prolificworks.com/gg/OqGWrzIQhcuXM4p2rHYs

My story is a dirty little number called An Illicit Affair, where you get to meet your new favorite Daddy, Jordan. He’s working late on Valentine’s Day and things get more than a little bit heated with his business partners teenage son. It’s just the kind of thing you’d expect from me, and you can own it for free as long as you claim it before the 15th.

This story is really special to me, because not only was it a fun chance to write some incredibly dirty talk between my new two guys, but it’s also the first introduction to my NEW SERIES, Secrets in Edgewood. After I wrapped up Worth the Chance and closed the book (so to speak) with Giving Consent, I wasn’t sure what I wanted to write. I’d been tossing this idea about a priest around for awhile, but wasn’t sure where to go with it. Once the story came to me, it poured out in all it’s angst and tension filled glory. I knew there was no way it could stand alone. I wanted to write more books like theirs and decided Edgewood was going to be my new home for awhile.

The first full length release from Secrets in Edgewood will be out March 7th, and it’s called A Taste of Sin. I just revealed the cover today in my readers group, and I wanted to leave it here for you all to see along with the blurb and an exclusive excerpt! 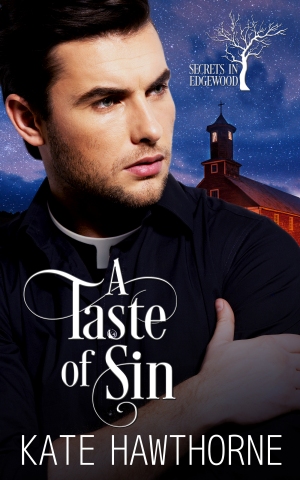 “Do you two know each other?” Lisa asked, leaning over the counter, eager for gossip.

“I think…” Dominic started to say, stopping himself and taking a step backward.

“Yeah.” Reed cleared his throat and risked a look at Dominic’s face. “We were in foster care together.”

“Foster care?” Lisa chirped. “I didn’t know either of you were adopted. How lovely to reconnect then, after so long.”

Reed swallowed, Dominic’s eyes intent on him, and so dark, they looked like polished obsidian. It was a stare he remembered, eyes he knew. The emotions in his stomach twisted, an uncomfortable confusion burning its way through his bones.

Reed lived a careful and calculated life, but the feelings he’d had toward Dominic when they were children had been anything but. Dominic had been his best friend, his only friend, the two of them housed with the same foster parents for over a year, until Reed had been adopted just after Nic’s fourteenth birthday.

Margaret and James, his adoptive parents had been kind and gracious, also devoted Catholics, who’d raised Reed up in the church they’d attended their entire life. He’d been old enough to choose for himself at that point, but agreed to attend mass because he liked the rigidity and structure the Catholic faith offered.

They had been wonderful parents, as tolerant and patient as they could be after taking in a teenaged orphan, and Reed woke up missing his makeshift family every single day. James had passed years ago, but Margaret had always been there for him, like a mother should.

He’d long ago stopped waking up with that same yearning for Dominic. Or so he thought.

“Reed was adopted,” Dominic told Lisa, tilting his head toward her while keeping his eyes focused on Reed. “I never was.”

Reed Matthews lives a quiet and structured life in Edgewood. A devout Catholic going on his sixth year as principal at Our Lady of the Mount School, Reed thrives on routine. But one unplanned excursion for Chinese takeout is enough to send his meticulously-constructed world into a tailspin.

After growing up in foster care, Dominic O’Halloran decided to enter seminary in his early twenties, and he’s dedicated his adult life to creating space for the LGBT community within the church. Weeks after answering the call from St. Paul’s Episcopal Church and moving to Edgewood, Dominic finds himself face-to-face with the one person he’s never been able to leave in the past–his childhood best friend.

Dominic and Reed find themselves entangled in decades old unresolved feelings and a new and very urgent lust. Reed is terrified of damning his soul, and Dominic is worried about losing his heart. But all it takes is one make-believe kiss for them to realize they’d throw everything away for another taste of sin.

Born and raised in Southern California, Kate Hawthorne woke up one day and realized she had stories worth sharing. Now existing on a steady diet of wine and coffee, Kate writes stories about complicated men in love that are sometimes dirty, but always sweet. She enjoys crafting hard-fought and well deserved happy endings with just the right amount of angst and kink.

From estate sale shopping to shoe worship, there’s something in at least one of her books that’ll tickle your fancy. Visit her website at www.katehawthornebooks.com

Kate has brought a ARC copy of A Taste of Sin to give away to one lucky reader. The copy will be sent direct to Kindle. Just leave a comment at the end of the post to enter. The contest ends on Friday, February 15th at 11:59 pm ET.

All Buy links to Amazon in our reviews contain affiliate links. As an Amazon Associate, I earn from qualifying purchases.