Audiobook Review: Where Death Meets the Devil by L.J. Hayward 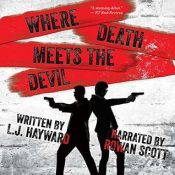 Working undercover, Jack Reardon didn’t expect much on his birthday. However, he definitely didn’t anticipate waking up tied to a chair in a torture shack in the middle of the Australian desert. He’s been undercover for 15 months and thought his position was secure, but his cover has been blown. Jack doesn’t expect to make it out of the shack, but then elusive assassin Ethan Blade shows up and not only frees Jack, but gets him out of the compound with the help of a camel named Sheila.

Jack is completely distrustful of Ethan from the start and cannot understand how the man chooses to be a cold-blooded killer. But Jack soon learns that there is so much more to Ethan than what he sees on the surface, especially when Ethan nurses Jack back to health in the remote desert. As the men make their way through the desert, a camaraderie develops between them that turns into full blown lust. But Jack really has no idea what is going on and can’t be sure that Ethan isn’t just playing him.

In present day, it has been a year since Jack has returned from the desert and one year since he has seen Ethan Blade. He’s on desk duty at his job with the Australian Meta-State as he has not yet been deemed to be trustworthy after the events in the desert. The lack of action is wearing on him until Ethan infiltrates the offices and will only speak to Jack. Jack wants to hate Ethan, oh he really does, but he just can’t. And, Jack really wants to know why Ethan turned himself in. Jack is torn between loyalty to his country and believing Ethan as Jack’s foundation may be shifting again. Jack will have to make his way through information that leaves him doubting everyone around him, including Ethan, but it’s Ethan he can’t stay away from.

If you like romantic suspense, this is a book you should check out. The set up lures you in and the characters, especially Ethan, are intriguing enough to keep your attention. We first meet Jack when his cover is blown and torture seems to be his fate. He is rescued by Ethan and while Jack has never met the man, he knows that he is an assassin.

The chapters in the book alternate between “then” and “now.” Then is when Jack was undercover and the time he spent with Ethan in the desert, and now is one year later. The timelines tell the complete story, but they overlap and twist and I couldn’t wait to get back to where we had left off in each time frame. It made for intense reading as the stories start to come together.

The story is told from Jack’s POV and it worked well to keep Ethan a mystery. Jack is all about rules and upholding the law and he thinks that Ethan is nothing more than a cold-blooded killer and we slowly sees the layers beneath Ethan the same time Jack does. And, as this is a continuing series, we still don’t know everything there is to know about Ethan. The men develop a personal relationship and Jack’s feelings for Ethan really surprise him and there is a tenderness to their interactions that Jack is not prepared for. The book leaves plenty of room for both their intimate relationship and the overall story arc to continue and while I would have liked the personal side to have been developed a little more here, I will certainly pick up the next in the series.

This was the first performance I have listened to from Rowan Scott and I really enjoyed his voice. He has a pleasant accent (an accent to my ears) and gave a smooth reading. The voices were not that varied and I could have used a little more to differentiate between Jack and Ethan and many of the secondary characters. He varied the intensity sometimes, but not all of the time, and some dramatic moments had more depth than others. It also did take extra concentration at first to get into the flow of the style of the narrative and then to remember what time frame we were in when turning it back on after a break, but that became minor as the book went on. I look forwarding to continuing with the next book when it comes out on audio, as well as checking out future works by Scott.