Audiobook Review: The Other Book by Roe Horvat 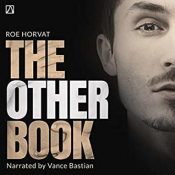 Tyler has sort of a love/hate relationship with his boss, Joel Sandstrom. At work, Joel is cool and aloof and seems to hate Tyler. But at the same time, Joel surprised Tyler one day with a hot office hookup. Now the two alternate between barely tolerating each other and sneaking around to have some of the hottest sex Tyler has ever experienced. As cold and controlled as Joel is at work, when he lets go, it is with an intense passion that makes Tyler go crazy.

As the men continue their encounters, Tyler begins to see the stress and anxiety Joel faces. Joel isn’t out and is fearful of anyone knowing he is gay. Their time together is the one chance he has to really let go and be who he is, and Tyler loves to be able to provide that for him. Eventually, what started out as just sex begins to move to more, and Tyler is surprised when Joel is interested in something more serious between them. Unexpectedly, what started out as just hot hook ups now looks to be turning into an actual relationship between them.

I heard so much about The Other Book when it first came out that I was eager to check it out in audio. The story is wonderfully steamy and really showcases how the erotic side of a story can do more than just titilate, but also give us insight into the characters and their relationship. Horvat uses the sexy scenes to great effect and they showcase the progression of Joel and Tyler’s relationship, and particularly the way the sex helps Joel feel grounded and work through some of his emotional issues. The men are super hot together and this aspect of the story was the highlight for me. I’ll also note that there are a couple of scenes that involve multiple partners — one with Tyler alone with two friends, and one as a foursome with the same couple. I absolutely loved their dynamic with Adam and Christopher (and am thrilled that they got their own story in Adam Only), so I really enjoyed that aspect of the book.

I also liked the way Joel came into his own over the course of the story. He started out so fearful, so removed from everything, and just cut off from happiness. While Tyler is willing to wait for Joel to be ready to come out, Joel is the one who instigates moving things forward. I did feel like the transition from bickering fuck-buddies (fuck-enemies?) to men who were trying for a relationship happened a little quickly for me to fully understand what changed between them. But I enjoyed their dynamic and there is a sweetness between them that balances nicely with the more passionate moments.

I listened to this one in audio with Vance Bastian and, unfortunately, I just didn’t feel that he was a great fit for this story. First, I will say that Bastian seems like a solid narrator and I wouldn’t hesitate to listen to him again on another book. The quality of the audio is there and the emotions come through the narration. But to me, his voice just didn’t fit either of these characters. Joel is presented as super smooth, controlled, and polished in his business and Tyler has a strong, dominating side during his sexual encounters with Joel. Bastian’s narration just didn’t embody either of these men the way they were portrayed in the text to me. It just felt very incongruous with how the men were described to the point where I found it terribly distracting, especially when I first started listening. I also found that at times Bastian’s cadence was off, with things choppy or emphasized in weird places. Joel’s voice varied a lot and didn’t hold consistently across the book, sometimes drifting toward the voice for Tyler and the narrator.

I find that with audio books, when the narrator and text feel like a good match, I am barely even aware that I am combining two mediums. Everything just feels seamless and I don’t think about the text as I am listening. But when the audio doesn’t fit the book, I find myself thinking about the words and how they would come across when I am reading, versus how they sound when listening. That was the case here and this duality became very distracting for me over the course of the book.

Again, the audio isn’t awful and if the voices gel more with your idea of what these guys should sound like, I think the audio could work just fine. As I said, I would listen to Bastian again. But I think that my enjoyment with the overall story was impacted by my feelings about the audio, unfortunately, and I’d probably recommend the written book, or at least checking out a sample before jumping into the audio.