Audiobook Review: The Nerd and the Prince by B.G. Thomas 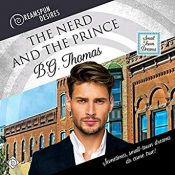 Jason Brewster struggles to find companionship in his small Missouri town. Most of the men he’s met online are closeted or cheating on their wives. He doesn’t want to leave his small town, especially because he runs a coffeehouse/bookshop that serves as a community gathering place. Those spaces are dwindling in the era of WalMart, so Jason works hard to keep the small town vibe going. Also, Jason writes mythology-inspired, gay romantic fiction, drawing on his mother’s heritage of Greek myth.

Amadeo Montefalcone is not native to Jason’s small town. A prince in Montrosia, he’s come to find a new life with a man who could love him for himself, not his title, which Amadeo fully plans to abdicate. Monterosian law forbids a king with a same-sex partner, and Amadeo believes his younger brother would make a better leader, anyway. Masquerading as “Adam,” Amadeo meets Jason nearly immediately upon settling in—their backyards touch. They are almost as immediately captivated with one another. There is the slight complication of Jason’s married, closeted, high school hook-up trying to make a play for either man, but he’s dealt with rather handily.

What isn’t immediately dealt with is Amadeo’s identity—and how can he really trust that Jason will love him without revealing his true self. Naturally, escaping Monterosia does not remove Amadeo’s responsibility to it—and sudden troubles force both Amadeo and Jason to make some bold decisions.

I liked this story for it’s creativity. There were some rather tenuous stretches of disbelief for me regarding the convenience of Amadeo finding a suitable mate in Jason’s small town. Heck, Jason has lived there his whole life and not found anyone until “Adam” arrived. The whole mythology thing, from the purposeful naming of Jason and his twin sister after Greek heroes and deities, was another eyebrow raising happenstance, for me. Could it happen? Perchance, but wow are we resting a lot on fate, here. The climax, from Amadeo and Jason travelling to Monterosia all the way to the end of the story, went in directions I don’t think Google Universe could map. It really brought in an almost urban legend/fantasy twist I wasn’t even close to expecting. And, I’m not sure I liked it, plot-wise, because I signed up for a romance and ended up with a mixed-up fantasy. It took way more than suspension of disbelief for me to keep listening. Also, for all Jason’s desire to remain in his small town, he seems to shift his life plan in about 4 minutes flat. That added to my issues with character consistency.

This is a Dreamspun Desires book, so it’s a little bit of a romance fairy tale—and includes some interesting mythology, too. Do not expect much sexy times, and those that are included are not very intense.

As an audiobook, I want to acknowledge the narrator’s skill in delivering the “Monterosian” language in a manner I could relate to—which is especially hard when only hearing the words. I think it is likely to be akin to Italian, but with dialectical differences. That came through clearly, as did Amadeo and his family members’ accents. What I did have trouble with, as a listener, was the narrator’s natural voice and cadence. His voice seemed to have a distinct accent that overlaid the whole audiobook. As Jason is from Missouri, this inconsistency was CONSTANTLY pulling me out of the story. The cadence, too, was littered with awkward pauses and I needed to put the reading speed up to 1.5x just to remain engaged.