Today I am so pleased to welcome Alice Winters to Joyfully Jay. Alice has come to talk to us about two of her latest release, A Villain for Christmas and the audiobook of The Hitman’s Guide to Making Friends and Finding Love. She has also brought along narrator Michael Ferraiuolo to chat! Plus a great giveaway! Please join me in giving them a big welcome!

Thank you so much for having me here today. I’m here to talk about my recent release, A Villain for Christmas, as well as my audiobook, The Hitman’s Guide to Making Friends and Finding Love. I also have an exclusive mini interview with the amazing narrator Michael Ferraiuolo and will be giving away two copies of The Hitman’s Guide audio (UK or US only).

A Villain for Christmas is a standalone book in the Snow Globe multi-author series. It’s about Landon, a guy with the power of telekinesis, who was raised by a family of wannabe villains. While they want to rob banks and steal, he’s more interested in reading a book and crushing over the city’s main superhero, August. He may or may not agree to rob a bank just in the hopes of August catching him. The book is filled with banter, humor, action, and romance. It’s available now on Amazon and is on KU.

I also recently published the audio version of my book The Hitman’s Guide to Making Friends and Finding Love, narrated by Michael Ferraiuolo. He did an amazing job capturing the personalities of Jackson and Leland. The book is about a hitman who falls in love with a PI, and it’s filled with comedy, action, and romance. Because of Michael Ferraiuolo’s wonderful work, I thought it’d be interesting to ask him some questions about narrating in a mini interview.

Alice: As the author, one of my favorite parts of hearing my audio brought to life is seeing how well you interpreted how a character should act, their emotions, how they should deliver a line, etc., without being told. It’s clear that you have a lot of talent at not only the voices you give characters but understanding them as well. What’s your favorite part of narrating?

Michael: There are so many aspects of narrating that I find enjoyable. The discovery of a character’s voice enchants me. The process of performing a particularly challenging scene thrills me. Collaborating with wonderful authors like you delights me. Though if I had to choose my favorite part of narrating, it would be those moments when an author tells me that I was able to capture their characters’ voices and bring them to life in a way that truly makes them happy. There’s a deep satisfaction in that for me.

Alice: I gave you two fairly different characters to work with. Leland, who covers up everything he can with a joke, and Jackson, who at first is very hesitant to let this crazy hitman into his life. One thing that really stood out to me is the way Jackson’s voice slowly and gradually changed as he began to trust and like Leland. He goes from being kind of short with him to really enjoying being with him, and it’s all seen so clearly just through your voice. What’s your secret to getting into their heads and knowing exactly what to say, and does that affect your process for narrating?

Michael: To me, everything begins with the dialogue. Sometimes a character’s dialogue is so uniquely written that you can hear their voice immediately. In this case, Leland hurled himself off the page and told me what he should sound like! It is often the case that I’ll read a character and just know what they should sound like based on the text alone. Other times you find yourself playing around with different voices until one just clicks. I feel that the text should always be guiding and informing your performance choices from chapter to chapter. We reveal more or less of our true voices in our real-world interactions all the time and the same is true of these characters. I feel that as the characters evolve from chapter one to the story’s end, so too should their voices.

Both of these titles are currently available on Amazon and Audible—check them out today!

I’m going to be giving away two audiobook copies of The Hitman’s Guide (codes are only available for US and UK only). For a chance to win, simply leave a comment! 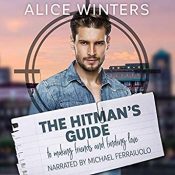 What happens when a snarky hitman and a by-the-book PI cross paths?

Leland
Being a hitman has its perks, but I never thought getting an accidental mooning by an attractive PI while he’s caught on a fence would be one of them. While it’s not exactly love at first sight, he’s captured my interest and won’t let go.

Suddenly, I find myself caught in a game of cat and mouse, determined to attract the attention of Jackson, the PI who should be my enemy. He pretends like he’s not flattered by my flowers and the mentions of my totally-not-fictitious blow-up doll Randy (or was it Dandy?), but I know better. Why else would he be teaming up with me to bring down Hardek, one of the city’s most ruthless criminals?

Jackson
Even though the cops are telling me that the hitman is a notorious contract killer, I can’t help but admit that I’m drawn to him. He’s funny, charismatic, and attractive. There’s no way this ridiculous man can be the person the cops are after.

But when Leland ends up at my doorstep injured, I’m faced with a tough choice. It’s my duty to hand him over to law enforcement, but my heart has other plans. I want to keep him. To protect him. To be with him.

Though one question remains: why in the world does the man have so many d*mn guns?

Despite growing up in a family of villains, I’d rather curl up and read than commit crimes. When I get coerced by my brother into helping him rob a bank, I run into August, my childhood crush—also known as Chrono, the city’s greatest superhero. He’s sexy, sweet, and suddenly he’s asking me to Thanksgiving with his parents. It’s probably because he doesn’t realize that I’m Leviathan, a villain with the power of telekinesis. And I can’t tell him because he’d never forgive me and would stop doing things like cooking for me—wait, maybe that would be a good thing, since he’s a terrible cook. It doesn’t help that my parents think they’re the ultimate villains and won’t stop getting in my way, although they can’t even steal toilet paper without getting caught.

But when real supervillains (not the wannabe kind that I grew up with) start targeting August, I might be forced to show everyone who I truly am: a slightly warped and snarky man who’d really rather read a book than save anything… besides August. I’ll tear this world apart just to get another glimpse of him in those glasses and spandex suit. I’ll do whatever it takes to keep him safe, even though it means exposing my true identity. Luckily, August still cares about me, proving that even a villain and a hero can fall in love. Hopefully, we’ll be able to save the world in time for Christmas.

Alice Winters started writing stories as soon as she was old enough to turn her ideas into written words. She loves writing a variety of things from romance and comedy to action. She also enjoys reading, horseback riding, and spending time with her pets.

Alice has brought two audiobook copies of The Hitman’s Guide 1 to give away, one each to two lucky readers (US or UK only). Just leave a comment at the end of the post to enter. The contest ends on Tuesday, December 3rd at 11:59 pm ET.