Audiobook Review: Where You Are by J.H. Trumble 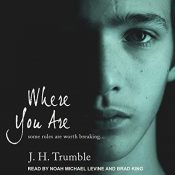 Robert Westfall carries a prominent family name, but his father never wanted to marry his mother and has never recovered from her becoming pregnant in college. Robert’s father was destined to become a doctor like the rest of his family, but brain cancer derailed those plans and, after being sick for years, he is terminal. Robert was never close to his father and now, as a senior in high school, everything is coming apart. Robert’s extended family has taken over his house and they continue to treat him as a second-class family member and his boyfriend is cold and distant. The only place anything makes sense is calculus class.

Andrew McNelis is concerned when he sees his best student’s grades falling, but he worries about crossing that student-teacher line. Robert needs someone on his side and Andrew becomes his friend, but that line starts fading fast. Andrew knows he can’t get involved with a student, but as every day passes, it becomes harder for the men to stay away from each other. They can’t be seen together in public and they think they are being careful, but with risks this high, something is bound to explode.

Where You Are was a struggle for me for so many reasons. When it opens, Robert’s father is dying and Robert’s life is extremely stressful. A number of characters are introduced and one is more loathsome than the next. Robert has two aunts that take over his house while his father is dying. They rearrange things, make it Robert’s fault when their young children vandalize Robert’s room, treat his mother as the hired help, and constantly remind him that he is less than everyone else in the family. We are shown evidence that Robert’s father never cared for him and it is extremely unpleasant to watch for the first part of the book. Although Robert’s mother has her own issues to deal with, she mostly responds by leaving the house, and Robert is basically waiting for them to be able to move on to life without his father, although his feelings are complicated as well. Robert also has a boyfriend sort of in name only; they spend little time together as the boyfriend has to schedule Robert into his calendar, and their relationship was already in progress when the book starts and never explained well or at all.

Robert is then going through the motions at school and his teacher, Andrew, steps up for him. The attraction is there from the start and while Andrew knows he shouldn’t be attracted to a student, he just can’t help himself. The teachers gossip about the students, and while maybe it happens, the way it was presented here was distasteful. Andrew is 24 and Robert is 17, and while the age of consent in Texas where they are is 17, there was an incredible imbalance of power here. Andrew has a young daughter and an ex-wife, and Robert is in an incredibly emotionally vulnerable position with almost no relationship experience and everything came off as dysfunctional and slightly creepy to me as these two were nowhere near being equals.

As their relationship progresses, Andrew tries to cover his tracks and attempts to manipulate a colleague, his ex-wife is trying to manipulate him, and all the while Robert and Andrew think they won’t be caught. But it wouldn’t be a student/teacher saga if everything went smoothly and it wasn’t a matter of if, but when, and that became the only part of the story that had me interested for a moment. I didn’t believe in them as couple and I didn’t see a future for them together. Robert also has a friend in school with a boyfriend and the narrative keeps referring back to their journey as if we were supposed to know them and it does turn out they were the characters in an earlier book, but without reading that one, their story didn’t fit in here. There wasn’t much I enjoyed about this story, largely due to all of the characters being vile and unpleasant.

This audio was dual narrated by Brad King and Noah Michael Levine and the narration didn’t help this book at all. I usually enjoy dual narration, but it was not well executed here. One narrator performed the chapters from Robert’s POV and the other performed the chapters from Andrew’s POV, but neither created a distinct voice for either of the main characters. Both Andrew and Robert were voiced in the same way that the narrators read everyone else. Both characters also sounded the same as one another and when they were speaking to each other, it was impossible at times to determine who was talking, especially when they were texting with no character name prompts. Then, the narrator would switch and it was the same thing all over again with the second narrator. The narrators also sounded much older than the characters and I had to remind myself often that Andrew was only 24.

This book didn’t work for me from the story to the narration and it was not one that I enjoyed at all.