Excerpt and Giveaway: The Wolf and the Sparrow by Isabelle Adler

Today I am so pleased to welcome Isabelle Adler to Joyfully Jay. Isabelle has come to share an exclusive excerpt from her latest release, The Wolf and the Sparrow. She has also brought along a great giveaway. Please join me in giving her a big welcome!

The next time they faced the raiders, they weren’t so lucky.

It was Mathis who spotted the approaching longship as they hid in the tall grasses surrounding an isolated hamlet. The forest encroached on the tiny settlement from all sides save the sea, so there were plenty of places to safely hide the horses.

There was no music this time. The hamlet was half-abandoned as it was, with some of the houses boarded up, their yards empty of fowl and livestock. The remaining villagers kept their doors tightly shut and their windows darkened, but it was a poor disguise against reconnaissance from the sea.

The narrow beach afforded no room to maneuver between the thickets of trees, so their troop went on the offensive as soon as the ship touched shore and the first raider jumped into shallow water. Screams and battle cries erupted into the crisp night air, mixed with the clashing of steel against steel.

Callan kept Derek in his sights—not because he didn’t trust him to hold his own, but because his gaze kept slipping, drawn to him as if by some sort of homing spell, like the ones the Agiennan witches used to find their way back to a familiar place when sailing uncharted waters.

This inexplicable urge to see Derek close by, to make sure he was unharmed, was a dangerous one. He was a tangle of contradictions, the mildness of his manner (which Callan had so sorely mistaken for weakness of character) hiding a sharp mind and a prickly sense of honor. Callan had no business wanting to pick on all those different strands, to be fascinated with all the distinct facets of Derek’s personality. Worst of all, he shouldn’t wonder what his lips would feel like against his own, or whether his body was as lean and perfect underneath all those clothes as he imagined it to be.

They were mere strangers, thrust together for a short while by some whim of circumstance, and would drift apart just as quickly, returning each to his own life. Derek had said he wished to be home for his family, after all. Callan hadn’t allowed himself to be close to anyone since Idona’s death, not even to take simple physical pleasure in anyone’s company. That was all there was to it—his loneliness and the stirrings of his flesh playing tricks on his mind.

Callan ducked as Leandre, coming from the right, swung her blade at the raider who charged at him with a heavy ax, slicing his arm at the elbow. His bellow of anguish was cut short as Callan plunged his sword into his chest. He wheeled around in time to see Mathis go down, blood spattering in a wide arc from a deep gash in his flank.

“No!” Callan started toward the young man, while the others chased the retreating Vanir pirates to their ship, but Derek and Gella got to Mathis first, kneeling on the sand now wet with blood.

“We got him,” Derek said when he saw Callan, his face a pale smear in the moonlight. Gella’s cheek was scraped raw and her hands were shaking, but she was already cutting away Mathis’s leather jerkin and pressing his ruined shirt to the wound to stop the blood. “Go!”

Callan gave him a curt nod and ran after his men. 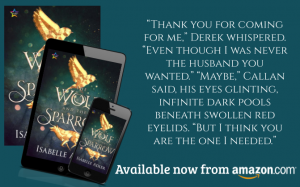 Derek never wished to inherit his title as a result of a bloody battle. With the old count dead and the truce dependent on his marriage to the rival duke’s son, Derek has no choice but to agree to the victor’s terms in order to bring peace to his homeland. When he learns of the sinister rumors surrounding his intended groom, Derek begins to have doubts—but there can be no turning back from saying I do.

After the death of his wife, Callan of Mulberny never expected to be forced into another political marriage—especially not to someone like the new Count of Camria. Seemingly soft and meek, it’s only fitting that Derek’s family crest is a flighty sparrow, worthy of nothing but contempt.

Another war with the seafaring people of the Outer Isles looms on the horizon, and the reluctant newlyweds must team together to protect those caught in the circle of violence. Derek and Callan slowly learn to let go of their prejudices, but as they find themselves enmeshed in intrigue fueled by dark secrets and revenge, their tentative bond is all that keeps their world—and their lives—from plunging into chaos.

A voracious reader from the age of five, Isabelle Adler has always dreamed of one day putting her own stories into writing. She loves traveling, art, and science, and finds inspiration in all of these. Her favorite genres include sci-fi, fantasy, and historical adventure. She also firmly believes in the unlimited powers of imagination and caffeine.

Isabelle has brought a $10 NineStar Press gift card to give away to one lucky reader on her tour. Follow the Rafflecopter below to enter.