Audiobook Review: A Crown of Iron & Silver by Hailey Turner 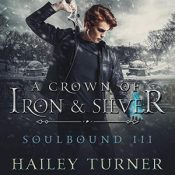 Christmas is coming and Patrick has no idea what to get Jono, except maybe socks. Ever since Jono officially claimed his pack, which includes himself and Patrick; the young dragon, Wade; and tiger shifter, Sage, the New York god pack has been making life … fun. Still being investigated by the SOA — a supernatural federal agency — for selling shifters to a vampire cartel for pit fights, the other god pack has been unable to directly challenge Jono, but that doesn’t mean they haven’t been a thorn in Patrick and Jono’s sides.

Still, with old friends from Patricks’s army days coming to visit for the holidays, and the gods leaving the both of them alone for a few months, things are looking up. Unfortuntely, the gods and the shifters aren’t the only preternatural beings capable of runining the holidays. Enter the fae.

A powerful New York witch family has had their child replaced with a changeling, the Summer Queen’s granddaughter has been stolen, the wild hunt is runing amok in New York, and Medb, the Queen of Air and Darkness, wants Patrick, so that she can trade him to the Dominion — a sect, run by Patricks’s father, that hunts gods and immortals in an effort to steal their godheads — and she may or may not have the Morrigan’s Staff, a powerful artifact that went missing during the 30 Days War.

So much for Christmas.

As ever, Patrick is twitchy, defensive, reactionary, and spiky. It’s been hard for him to open up his life to Jono, almost as hard as opening up his heart. And yet, somehow, he’s managed. Jono smooths out Patrick’s sharp edges, forgives his anger, and is someone Patrick can lean on when he’s the one needing shelter from the storm. Jono makes him feel safe, which is something Patrick hasn’t actually had much experience with. He lost his family at a young age, his mother killed by his father, his twin sister’s soul destroyed as their father put a stolen godhead into her so he could have access to the power; even in the army, there was always combat to face and lies to tell. Patrick couldn’t let anyone know who he was, who his father was, any of it. But with Jono, Patrick’s is entirely open. And Jono, soulbond or no, loves him. Warts, wallowing, wounds and all.

Where Patrick jumps in with both feet, Jono waits for the right moment to strike. He has a pack, and Jono isn’t going to risk them by moving to take control of New York too soon. Slowly, thread by thread, ally by ally, he’s weaving himself a cloak of many powers. But he’d throw it all away in a heartbeat for Patrick. With Patrick he can be soft, gentle, nurturing; he can be emotional, angry, indecisive, even fretful, because Pat loves the man, Jono, not the alpha of the god pack. Still, having a pack with him fulfills the shifter in him in a way nothing else does, and having Patrick in his pack just makes it that much better.

Patrick and Jono are equal partners in every way that counts, and it’s the strength of that relationship that draws people to them. They make each other stronger, but they also make each other better. Having a home, now, Patrick is more than willing to open it to people he trusts. Wade, their foundling, is a demanding brat, but — knowing his past, the trauma and horrors he’s endured — Patrick and Jono treat him with kindness and understanding. For all that he’s the angry one, Patrick is more gentle than you’d think, more caring of others; Jono has to play the cool alpha, but he gets to let loose in a way that he hasn’t before, showing off and letting loose. Because he knows Patrick’s got his back.

I love so much about these books, from the complex, respectful world building to the small touches, such as the offhand mentions of therapy, of having to pay the bills. The world they live in is a vital, alive thing, and each installation only makes it better. Watching Wade come into his own was fun, though he remained a brat throughout, and Sage’s moment where she may or may not have ripped Patrick a new one when he was acting out made me appreciate how much work the author puts into even the side characters.

Speaking of side characters, having listened the audio version of this to review (though I bought the ebook as soon as it came out), there are over a dozen and a half named characters with arcs, roles, accents, and personalities. Narrator Gary Furlong didn’t do as well at separating them in this book as he has before. There were several times where I didn’t know who was talking, which made the conversation between some of the fae confusing on the first listen. However, given the number of Celtic names, and even Celtic language and accents that Furlong had to get through, he still did an amazing job. As ever, he manages to get Patrick’s snark across, and during the moments where Patrick isn’t at his best, Furlong conveys the slurred speech without making it unintelligible. Jono’s accent wavered a bit, twice that I noticed, but given how many accents and genders and people were in those particular scenes, I don’t really think it’s that surprising. I don’t know anyone else who could handle these books as well as Furlong does.

If you haven’t already, read this series, they’re easily the best paranormal books out there — and I’m saying this as someone who loves paranormal romances. The world building, the characters, the imagination, the care taken to make each particular paranormal its own, realized thing… in my top five list, these books take the first spot. Also, what with this being a holiday book, and with all the emphasis on what to get someone for Christmas, isn’t that a sign that this would be the perfect paranormal purchase for the season?

I do highly recommend the audio books with this series, as many of the names, particularly in this book, are challenging. Or, you know, buy the ebooks and the audio books. Just so long as you give these books a try.