Guest Post and Giveaway: Shots on Goal by Amy Aislin

Today I am so pleased to welcome Amy Aislin to Joyfully Jay. Amy has come to talk to us about her latest release, Shots on Goal. She has also brought along a great giveaway. Please join me in giving her a big welcome!

Thank you for joining me to celebrate the release of my newest m/m sports romance, Shots on Goal, and thank you to Joyfully Jay for allowing me to briefly take over the blog!

In late 2016 or early 2017, a small indie publisher put out a submission call that I answered with a novella called The Play of His Life. That second chance romance novella featured a main character who was a former NHL player, and in it, we met some of his former teammates.

Three books later, I have a trilogy on my hands. Each book has led into the next…whether on purpose or by accident, I’ll let you be the judge!

What’s next, you ask? I’m working on something a little different that will be out in June, the first book in a brand new trilogy that I’m so excited about. Without spoiling anything, think Wyoming, mountains, and…dare I say it? Cowboys. And you’ll get an introduction to it in my short story, Coffee Cart Thursdays, appearing in the Love in the Springtime charity anthology that will be out this spring!

But what about the Stick Side series? I’m putting it temporarily on hold while I work on some other fun projects, but I do intend to get back to it eventually. In fact, one of the main characters for book four is already knocking at my door. Think jock meets nerd.

I hope you enjoy Shots on Goal. It features opposites attract, a local library under threat of closure, and a made family. 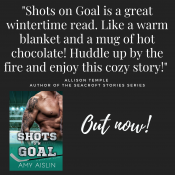 Recently traded to the newly formed Vermont Trailblazers, professional hockey player Roman Kinsey needs to focus on helping the team win games and filling the stands, not on the blond, bespectacled part-timer who works at the library he volunteers at. He knows all too well that outing himself equals heartache and ridicule…or worse.

Cody Evans, psych major and grad school hopeful, notices everything and thinks too much. But he doesn’t know what to think when he sees Roman reading to kids. The rugged hockey player just doesn’t look like the type. But it stirs something in him, something he’s never felt before.

When the library is threatened with closure, Cody enlists Roman’s help. As they get to know each other better…much, much better…they realize that they have more in common than books. But Roman’s keeping a big part of himself from his team, and giving in to his feelings for Cody might be more than he’s willing to risk.

Amy’s lived with her head in the clouds since she first picked up a book as a child, and being fluent in two languages means she’s read a lot of books! She first picked up a pen on a rainy day in fourth grade when her class had to stay inside for recess. Tales of treasure hunts with her classmates eventually morphed into love stories between men, and she’s been writing ever since. She writes evenings and weekends—or whenever she isn’t at her full-time day job saving the planet at Canada’s largest environmental non-profit.

An unapologetic introvert, Amy reads too much and socializes too little, with no regrets. She loves connecting with readers. Join her Facebook Group to stay up-to-date on upcoming releases and for access to early teasers, find her on Instagram and Twitter, or sign up for her infrequent newsletter here.

Amy has brought a winner’s choice of signed paperback from her back list to give away to one lucky reader on her tour. Follow the Rafflecopter below to enter.