Audiobook Review: Worth the Chance by Kate Hawthorne 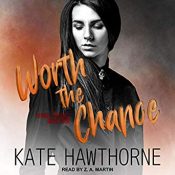 Verity Jones knew who they were at a young age. Living on a farm in Missouri was not the place for them, and after Verity came out as non-binary, they left for college in New York. Verity met Landon in college and while their relationship was platonic, Verity exercised dominance and control over Landon as needed and their relationship has always been complicated. When Landon becomes involved in a serious relationship, Verity is left alone and in unfamiliar territory.

Aaron Hoffman is close with the group of friends who frequent Rapture, the BDSM club Verity and Landon own, and when Aaron meets Verity, he is fascinated. Aaron doesn’t know much about Verity, but he is determined to get Verity to spend time with him. Aaron is patient with a wary Verity, and Verity struggles with intimacy and figuring out how to blend two sides of their personality into one relationship. Verity realizes that what they always thought they wanted might not be true, and with Aaron at their side, the two of them could have the perfect relationship and the perfect future.

Verity was introduced in the beginning of the first book in the Giving Consent series, Worth the Risk, and I have been intrigued since that first introduction. This book goes back almost to the beginning of the series and then runs parallel to some of the former storylines from a different perspective, which is a style that I enjoy. During the series, Verity comes off as confident and secure, but here we see that Verity has a vulnerable side and is unsure of how to proceed in an intimate relationship. Verity has always considered themselves to be a switch and wasn’t sure how that would work in the relationship they envisioned for themselves and so Verity hasn’t had a long-term relationship because of it. Aaron wants everything with Verity, but Verity is afraid in the beginning to commit to him.

Aaron was a bit of a bland character for me. We don’t really get to know much about him. We learn that he inherited money, although the details are not disclosed, and he doesn’t have to work, and he coaches a kids sports team. But other than that, we aren’t given much about Aaron at all and while he was devoted to treating Verity well, there wasn’t a lot given to make him interesting to warm up to. By the end, I did like him for how he treated Verity, but on his own, Aaron wasn’t overly intriguing.

The book gives us a lot of insight into Verity and how growing up on a farm in small town Missouri shaped them. Verity no longer speaks to their parents, but has a brother, Chaz, still on the farm that Verity is close to. Chaz was an integral part of Verity’s story, and while it seemed he was being set up for his own story, his life alone on the farm didn’t all add up here and some areas felt like they were given the magic wand of fiction.

A lot of Verity and Aaron’s story was figuring out their sex life to make the other parts of their relationship work as well and it fit the theme of this series. There are frequent sex scenes and they lead to Verity coming to terms with what they want in a relationship and finding a true place to belong. The former MCs are all here to catch up with and I certainly enjoyed getting to know Verity better and seeing them find a place to belong with a found family and Aaron by their side.

Z.A. Martin has been the voice of this entire series and I have come to recognize the characters through his narration. He handles Verity well as he blends all of the sides to their personality in one smooth and consistent voice. All of the characters retain their voices throughout the series and it’s always clear who is speaking. Martin gives a familiar feel to the narration and creates a feeling of watching friends live out their lives and the audio is certainly a good way to enjoy this series.