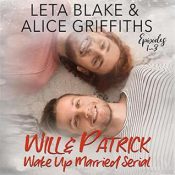 Will is dumped by his on again/off again boyfriend via phone on a trip to Las Vegas. This prompts him to blow his hard fought sobriety and get drunk, which leads to being picked up in the bar and the walk of shame the next morning. The only problem is there’s no walk—just shame, then horror, then a decided need to vomit because in their drunken state, Will and hunky neurosurgeon Patrick McCloud have gotten themselves hitched and that is just the beginning of the crazy nightmare that is about to swallow poor Will alive.

Will & Patrick Wake Up Married is book one in the six-part Wake Up Married serial by authors Leta Blake and Alice Griffiths. The stories have been released as an audio bundle featuring the first three novellas of the group. This book is hands down hysterical and I am not sure whether I want to throttle Patrick or hug him half the time. With poor Will’s ties to a family of mafiosos, the money he inherited has a bundle of stipulations attached to it, including that Will can’t divorce. Will is determined that the fortune his grandfather left him goes to doing good for people and will not fall into the hands of the less than law fearing half of his family. Now, the one thing standing in the way of that is a grumpy, egotistical neurosurgeon who also happens to be his lawfully wedded husband.

In this first book we meet both Will and Patrick and learn about how they may end up married for far longer than they want. We also get the very real impression that beneath the arguing, the exhaustion, and the constant attempts by Patrick to jump ship, both men are dealing with occasional lusty flare-ups of attraction. I simply cannot wait to dive into book two and see just where this dynamic duo of writers takes this couple next.

Book two, Will & Patrick Meet the Family, picks up immediately after the first with Will introducing Patrick to his mother and Uncle Kevin. Will has a strange and less than healthy relationship with his mother, primarily because she, like his ex, Ryan, thinks that Will can only be safe if Ryan is there to look after him. It’s Ryan who dumped Will, but despite that, Will’s mother is sure he can repair the damage and get back with Ryan. For Will, that is something that he still hopes and dreams about, but for now, there is no way out of the marriage to Patrick until Will’s grandmother finds it. To say that Will’s mom, Kimberly, and his Uncle Kevin don’t like Patrick is a real understatement.

I have to admit, this second novella was a hard one to handle primarily because I felt poor Patrick really didn’t get a fair shake. Plus, Ryan revealed his true colors and what a bastard that guy turned out to be and yet Will still loves him. Poor Will—his self-esteem is shot, he continually thinks he is a failure, and Patrick has very little patience with that attitude. Essentially, this story was all about learning more of Patrick and his past and getting a real bird’s eye view of why Will turned out as he has. Both men are wounded in their own way—Patrick just hides it ever so much better. This then was a transitional novel—one that revealed more about each man and gave the reader a deeper understanding of what made Will and Patrick tick. For that reason alone, this turned out to be a critical stepping stone in the series for me.

Book three, Will & Patrick Do the Holidays, is where absolutely everything breaks loose and all kinds of pent up emotions and good old fashioned lust roars to the surface. This installment is also a pretty pivotal one for Will for it will be the first time he dares to admit to himself that perhaps things with Ryan will never be the same, nor does he necessarily want them to be. It is also a huge step forward in the relationship between Will and Patrick and not just because of the sex. Without giving too much away, suffice it to say that Patrick shares some of his past with Will that he has never shared with anyone else. It is a heartbreaking moment—poignant and emotional and really well written. While lots of things happen in this novella, it’s the raw and almost naked way Patrick shares about himself that carries this story. It is really quite beautiful and cements the idea that Will and Patrick may be about to cross a line neither ever thought possible.

I listened to this story in audio with narrator John Solo. First off, I absolutely loved how Solo voiced Will. With just the right touch of innocence, wistfulness, and shame, the way he presented Will made me fall in love with the character all over again. Deepening his timbre for Patrick, Solo imbues the voice with just enough sarcasm and self-congratulatory pride to make him very funny—just as the authors wrote him. I really enjoyed how each man was presented by the narrator—if possible, his reading of the novel made it even more humorous than it already is. With just the right pacing, John Solo fills his narrating of Will with all the various emotions from lust, to terror induced fear of telling his mother. Then he turns around and creates the perfect approach to presenting the pompous Patrick.

I am not a huge fan of Solo’s female voices—particularly Will’s mother, Kimberly. I felt that there needed to be a bit more iron steel behind Kimberly’s voice—a bit more bossiness. But as female voices, go it was most definitely different from the varied male characters and that is hard to do for a male narrator.

John Solo was pretty much the perfect man to enact this novel. He kept it light, yet remembered to give weight to the scripted moments of deeply emotional mental flagellation both Will and Patrick go through—Will more so than Patrick. The pacing was great, the humor intact, and Solo’s voice pleasant to listen to for the eleven plus hours these three novellas took to narrate.